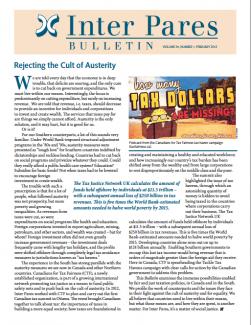 Rejecting the cult of austerity

We all believe that countries need to live within their means, but what those means are, and how they are spent, is another matter.

Medicare: We can afford compassion

According to the Canadian Centre for Policy Alternatives, we live in a richer country now than we have in decades. We can afford our public health care system. However, we must collectively choose to do so.

For thousands of undocumented immigrants across the country, cities such as Montreal, Toronto, and Vancouver are their hopeful new homes, but also places where they are mistreated.

Inter Pares believes that women’s health needs are a matter of human rights, and that national governments have an obligation to uphold these rights – not just on paper, but concretely through financing, policy, and service delivery.

Mining and Development: Making policy as though nations, and people, mattered

Recent World Bank and United Nations reports found that after the 2002-2007 commodities boom, over half of the population in resource-rich Southern countries were still living in extreme poverty. Worse, the number of extremely poor people living in the poorest countries actually increased by over 3 million per year during the boom period. In fact, poverty and inequality were being reduced more quickly in countries without natural resource wealth.