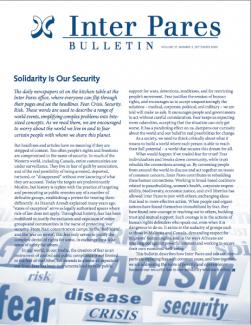 Solidarity is our security

Fear keeps us expecting more calamities, accepting that the situation can only get worse. It has a paralyzing effect on us, dampens our curiosity about the world and our belief in real possibilities for change.
Refugees in Malaysia: No sanctuary

Thousands of Burmese refugees are coming to Malaysia seeking security. But what they find is exploitation, extortion, trafficking, and sometimes death.

As a mining superpower, Canada plays a major role in exploiting Africa’s mineral resources. Canadian mining companies held $14.7 billion in assets in 35 African countries in 2007, a figure estimated to reach $20 billion by 2010. Through research and advocacy, TWN-Africa and Inter Pares are asserting that the accumulation of wealth in the North must not come at the expense of Africa’s economic and physical security.

After thirty-five years, Inter Pares and our counterparts have learned much about working together in pursuit of peace and justice. And along the way, we have had the privilege to be part of some enduring and inspiring successes. We are particularly proud to have been co-founders of the International Civil Liberties Monitoring Group (ICLMG), a story that exemplifies what social justice is all about.