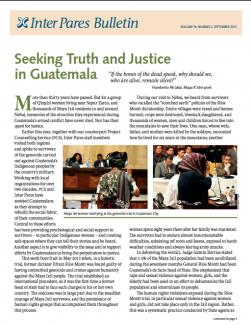 Seeking Truth and Justice in Guatemala
The proceedings against Efraín Ríos Montt and the attempts to hold to account those responsible for the sexual slavery of the women in Sepur Zarco are encouraging developments, highlighting the importance of ongoing, sustained accompaniment of Guatemalans in their struggle for truth and justice.

More to Migration than lo bonito

Inter Pares, PCS, and the Office of the Migrant work for the reform of migration policies in Guatemala and destination countries, including Canada, as well as challenging the structural causes of migration.

Lolita Chávez: Not your usual fighter

Over ten days, a group of 14 people will travel up and down over 1,100 kilometers of Guatemala’s winding roads to meet powerful human rights activists, from Nebaj, Río Dulce, Zacualpa and Chichicastenango.