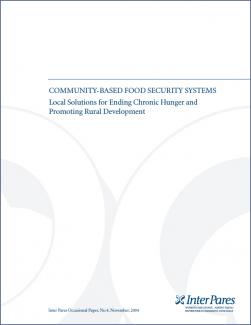 In 2001-2002, there was an extended drought in the Indian state of Andhra Pradesh. Crops withered and died in the heat. State authorities approached the federal government and asked for emergency food from the country’s stockpiles. In Medak district, a semi-arid area that receives little rain and is considered one of the poorest in India, women leaders met to assess whether emergency food was needed. Women from village after village said they had no need for external food assistance. What they had grown in their villages through their
own Community Grain Fund system was enough to meet their food requirements. This was surprising as these villages, like others nearby, were inhabited by among the least-materially privileged sectors of Indian society. Many of the people who live in Medak belong to the so-called “untouchable”, or Dalit, caste – the lowest rung on the Hindu social hierarchy. In addition, Medak is considered part of India’s “hunger belt”, sections of the country whose residents regularly experience serious food shortages1. How was it that these villagers, supposedly among the most food insecure in the whole country, turned out to have the greatest food security in the state in a time of scarcity and hunger?