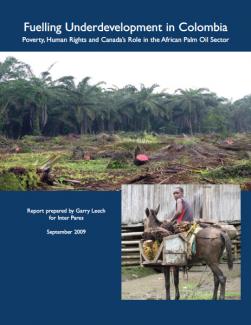 In May 2008, the House of Commons passed a bill requiring that fuels consumed in Canada contain specific minimum levels of agrofuels (also known as biofuels) by 2012. Less than two weeks later, the government of Prime Minister Stephen Harper announced that negotiations on a bilateral free trade agreement with Colombia had been completed and the two countries were ready to sign a pact. In just over a week, the Canadian government had laid the foundation for a dramatic shift in trade between the two countries that will likely have dire socio-economic, human rights, cultural and environmental consequences for communities in rural Colombia. This report examines the socio-economic, human rights, cultural and environmental impacts of the expanding production of African oil palm on rural Afro- Colombian communities and analyzes Canada’s current and future role.

Not surprisingly, the cultivation of food crops that can be used for agrofuels—sugarcane, corn, soybeans and African oil palm—has increased dramatically in the global South in recent years to accommodate the shifting energy needs of the North. Further, African palm oil is used in a variety of products, from soaps and cosmetics, to food additives, to industrial chemicals and paints. The cultivation of African oil palm in Colombia in recent decades has been directly related to violence perpetrated by right-wing paramilitaries against Afro-Colombian communities. In many regions, this violence has sought to displace Afro-Colombians from their lands to allow palm companies to expand their plantations. In other areas, the government has ensured that loans are available to Afro-Colombians for the cultivation of African oil palm but not for food
crops. Consequently, many peasants have little choice but to cultivate palm, as it is the only viable cash crop. After decades of producing oil palm, Afro-Colombian communities remain economically insecure and mired in poverty. They are also engaged in a desperate struggle to retain their culture and food sovereignty and to defend the natural ecosystem upon which they depend.

In 2007 Canada imported almost $30 million worth of palm oil from Colombia and four other nations—a dramatic 150 percent increase from two years earlier. Canada’s free trade agreement will only further promote the expansion of Colombia’s oil palm production, both directly and indirectly. To the extent the FTA facilitates agricultural trade, it will result in increased imports by Canada of crude and processed palm oil, making Canada increasingly directly complicit with the carnage associated with President Uribe’s strategy to expand palm oil production. In the name of free trade and “clean” energy, increasing numbers of Afro- Colombians will likely see their lives endangered, their land lost, and their food security further diminished in order to serve the needs of Canadians.