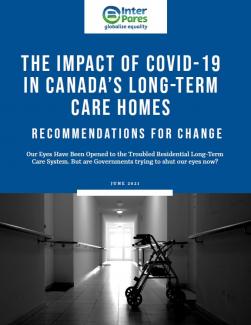 The terrible toll taken on resident and patient populations in Canada’s long-term care homes caused by the COVID-19 pandemic is shocking.

The deaths of over 15,000 people in long-term care facilities exposed serious flaws in the system, some of which could have been repaired well before the pandemic had governments acted on concerns raised by health care advocates over recent years.

Even worse, as this report finds, once the danger posed to long-term care residents was known following the first wave of the pandemic in 2020, governments still failed to take action, letting the pandemic cause thousands more preventable deaths in subsequent waves.

Governments’ responses to the crisis, as insufficient as they were in some cases, were hampered by a patchwork of regulations, little federal leadership and untied funding for provinces, and a sub-system of long-term care facilities that operates outside of the mainstream health care regime. The system is plagued by a predominance of homes owned and operated by for-profit companies, which fared much worse than their not-for-profit and public counterparts.

This report brings forward seven strong recommendations to address the long-term care system’s inadequacies, including the creation of a nationally-coordinated system adhering to national standards that are based on the principles of the Canada Health Act. The system should receive federal funding contingent on these standards being met by the provinces, with regular monitoring and reporting to verify compliance.