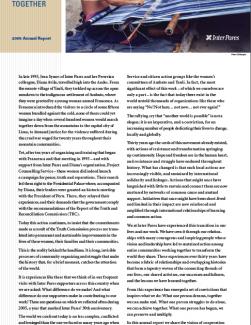 In late 1993, Jean Symes of Inter Pares and her Peruvian colleague, Diana Avila, travelled high into the Andes. From the remote village of Yauli, they trekked up across the open meadows to the indigenous settlement of Ambato, where they were greeted by a young woman named Francesca. As Francesca introduced the visitors to a circle of some fifteen women bundled against the cold, none of them could yet imagine a day when several hundred women would march together down from the mountains to the capital city of Lima, to demand justice for the violence suffered during the cruel war waged for twenty years throughout their mountain communities.

Yet, after ten years of organizing and training that began with Francesca and that meeting in 1993 - and with support from Inter Pares and Diana's organization, Project Counselling Service - these women did indeed launch a campaign for peace, truth and reparations. Their march led them right to the Presidential Palace where, accompanied by Diana, their leaders were granted an historic meeting with the President of Peru. There, they relayed their experiences, and their demands that the government comply with the recommendations of the Report of the Truth and Reconciliation Commission (TRC).

Today this action continues, to insist that the commitments made as a result of the Truth Commission process are translated into permanent and sustainable improvements in the lives of these women, their families and their communities.
This is the reality behind the headlines. It is long, invisible processes of community organizing and struggle that make the history that, for a brief moment, catches the attention of the world.

It is experiences like these that we think of in our frequent visits with Inter Pares supporters across this country when we are asked: What difference do we make? And what difference do our supporters make in contributing to our work? These are questions on which we reflected often during 2005, a year that marked Inter Pares' 30th anniversary.

The world we confront today is no less complex, conflicted and besieged than the one we faced so many years ago when Inter Pares was founded. The world has changed radically in these three decades, for better and for worse, and it is always difficult to identify the effects of specific actions in the dynamic processes of crisis, conflict, and change.

Over time, however, we do see the effects of our work, and we see the impact of organizations like Project Counselling Service and citizen action groups like the women's committees of Ambato and Yauli. In fact, the most significant effect of this work - of which we ourselves are only a part - is the fact that today there exist in the world untold thousands of organizations like these who are saying "No! Not here... not now... not ever again!"

The rallying cry that "another world is possible" is not a slogan; it is an imperative, and a conviction, for an increasing number of people dedicating their lives to change, locally and globally.

Thirty years ago the seeds of this movement already existed, with actions of resistance and transformation springing up continuously. Hope and freedom are in the human heart, and resistance and struggle have endured throughout history. What has changed is that such local actions are increasingly visible, and sustained by international solidarity and linkages. Actions that might once have languished with little to sustain and connect them are now nurtured by networks of common cause and mutual support. Initiatives that once might have been short-lived and limited in their impact are now reinforced and amplified through international relationships of learning and common action.

We at Inter Pares have experienced this transition in our lives and our work. We have seen it through our relationships with many courageous and inspiring people whose vision and leadership have led to sustained action among entire communities working together to transform the world they share. These experiences over thirty years have become a fabric of relationships and overlapping histories that form a tapestry woven of the connecting threads of our lives, our shared activism, our successes and failures, and the lessons we have learned together.

In this annual report we share the vision of cooperation and common cause that is the impetus of our work, using examples of the kind of experiences and actions - in Asia, in Africa, in Latin America, and in Canada - that sustain our optimism that a more just and humane common future for all of us on the planet is possible, and already unfolding.