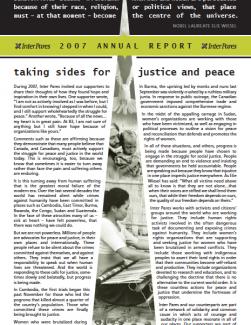 During 2007, Inter Pares invited our supporters to share their thoughts of how they found hope and inspiration in their own lives. One supporter wrote, "I am not as actively involved as I was before, but I find comfort in knowing I stepped in when I could, and I still support wholeheartedly the struggle for peace." Another wrote, "Because of all the news... my heart is in great pain. At 83, I am not sure of anything but I still have hope because of organizations like yours."

Comments such as these are affirming because they demonstrate that many people believe that Canada, and Canadians, must actively support the struggle for peace and justice in the world today. This is encouraging, too, because we know that sometimes it is easier to turn away rather than face the pain and suffering others are enduring.

It is this turning away from human suffering that is the greatest moral failure of the modern era. Over the last several decades the world has remained silent while crimes against humanity have been committed in places such as Cambodia, East Timor, Burma, Rwanda, the Congo, Sudan and Guatemala. In the face of these atrocities many of us – sick at heart – have felt powerless, that there was nothing we could do.

But we are not powerless. Millions of people are advocates for peace and justice, in their own places and internationally. These people refuse to be silent about the crimes committed against themselves, and against others. They insist that we all have a responsibility to speak out when human lives are threatened. And the world is responding to these calls for justice, sometimes slowly and belatedly, but progress is being made.

In Cambodia, the first trials began this past November for those who led the pogroms that killed almost a quarter of the country's population. Those who committed these crimes are finally being brought to justice.
Women who were brutalized during armed conflicts in places such as Peru, Colombia, and Guatemala are coming forward to demand that these crimes be publicly acknowledged. This violence is now being recognized by governments and reparations being made.

In Burma, the uprising led by monks and nuns last September was violently crushed by a ruthless military junta. In response to public outrage, the Canadian government imposed comprehensive trade and economic sanctions against the Burmese regime.

In the midst of the appalling carnage in Sudan, women's organizations are working with those who have been victimized, as well as engaging in political processes to outline a vision for peace and reconciliation that defends and promotes the rights of women.

In all of these situations, and others, progress is being made because people have chosen to engage in the struggle for social justice. People are demanding an end to violence and insisting that governments be held accountable. People are speaking out because they know that injustice in one place imperils justice everywhere. As Elie Wiesel has said: "What all victims need above all to know is that they are not alone...that when their voices are stifled we shall lend them ours, that while their freedom depends on ours, the quality of our freedom depends on theirs."

Inter Pares works with activists and citizens' groups around the world who are working for justice. They include human rights activists involved in the often dangerous task of documenting and exposing crimes against humanity. They include women's rights organizations that are supporting and seeking justice for women who have been brutalized in armed conflicts. They include those working with indigenous peoples to assert their land rights in order that their

communities become self-reliant and productive. They include organizations devoted to research and education, and to challenging the doctrine that there is no alternative to the current world order. It is these countless actions for peace and justice that undermine the fortresses of oppression.

Inter Pares and our counterparts are part of a network of solidarity and common cause in which acts of courage and audacity in one place resonate in all of our places. Our supporters are part of this network too, choosing to engage instead of turning away, embracing hope rather than neutrality and silence. It is through persistent and shared action that our dreams are nourished and our hopes can be realized.