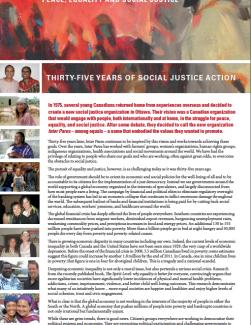 In 1975, several young Canadians returned home from experiences overseas and decided to create a new social justice organization in Ottawa. Their vision was a Canadian organization that would engage with people, both internationally and at home, in the struggle for peace, equality, and social justice. After some debate, they decided to call the new organization Inter Pares – among equals – a name that embodied the values they wanted to promote.

Thirty-five years later, Inter Pares continues to be inspired by this vision and works towards achieving these goals. Over the years, Inter Pares has worked with farmers' groups, women's organizations, human rights groups, indigenous organizations, health associations and social movements around the world. We have had the privilege of relating to people who share our goals and who are working, often against great odds, to overcome the obstacles to social justice.
The pursuit of equality and justice, however, is as challenging today as it was thirty-five years ago.

The role of government should be to orient its economic and social policies for the well-being of all and to be accountable to its citizens for the implementation of a just democracy. Instead we see governments around the world supporting a global economy organized in the interests of speculators, and largely disconnected from how most people earn a living. The campaign by financial and political elites to eliminate regulatory oversight of the banking system has led to an economic collapse that continues to inflict enormous damage throughout the world. The subsequent bailout of banks and financial institutions is being paid for by cutting back social services, education, workers' pensions, and healthcare around the world.

The global financial crisis has deeply affected the lives of people everywhere. Southern countries are experiencing decreased remittances from migrant workers, diminished export revenues, burgeoning unemployment rates, weakening commodity prices, and precipitous increases in food and energy prices. An additional 130 to 155 million people have been pushed into poverty. More than a billion people go to bed at night hungry and 50,000 people die every day from poverty and poverty-related causes.

There is growing economic disparity in many countries including our own. Indeed, the current levels of economic inequality in both Canada and the United States have not been seen since 1929, the very cusp of a worldwide depression. Before the onset of the financial crisis in 2008, 3.5 million Canadians lived in poverty; some estimates suggest this figure could increase by another 1.8 million by the end of 2011. In Canada, one in nine children lives in poverty; that figure is one in four for aboriginal children. This is a tragedy and a national scandal.

Deepening economic inequality is not only a moral issue, but also portends a serious social crisis. Research from the recently published book, The Spirit Level: why equality is better for everyone, convincingly argues that more egalitarian societies have significantly lower incidences of physical and mental health problems, addictions, crime, imprisonment, violence, and better child well-being outcomes. This research demonstrates what many of us intuitively know – more equal societies are happier and healthier and enjoy higher levels of social cohesion, trust and civic engagement.

What is clear is that the global economy is not working in the interests of the majority of people in either the South or the North. A global economy that pushes millions of people into poverty and bankrupts countries is not only irrational but fundamentally unjust.

While these are grim trends, there is good news. Citizen's groups everywhere are working to democratize their political systems and economies. They are promoting political participation and challenging governments to become accountable to all citizens. In all the places where Inter Pares works, people are reclaiming their right to have their interests represented in social and economic policies. In Canada, the Canadian Health Coalition is educating decision-makers on how our healthcare system can remain cost-effective and universal. In Peru, our counterparts are teaching economic literacy so that people can understand and influence how local governments establish budget priorities. In Bangladesh, poor women and men are organizing to demand access to basic government services for the least privileged. In Africa, people are working regionally to ensure that agreements with mining companies are transparent, and that taxes and royalties benefit local economies.

In this Annual Report, we provide a glimpse of how some of our counterparts are promoting equality, democracy and justice in their communities and societies.