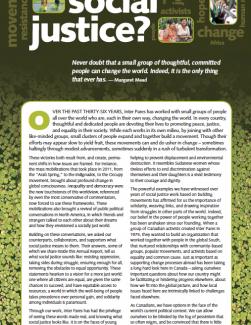 Never doubt that a small group of thoughtful, committed people can change the world. Indeed, it is the only thing that ever has. — Margaret Mead

Over the past thirty-six years Inter Pares has worked with small groups of people all over the world who are, each in their own way, changing the world. In every country, thoughtful and dedicated people are devoting their lives to promoting peace, justice, and equality in their society. While each works in its own milieu, by joining with other like-minded groups, small clusters of people expand and together build a movement. Though their efforts may appear slow to yield fruit, these movements can and do usher in change – sometimes haltingly through modest advancements, sometimes suddenly in a rush of turbulent transformation.

These victories both result from, and create, permanent shifts in how issues are framed. For instance, the mass mobilizations that took place in 2011, from the “Arab Spring,” to the indignados, to the Occupy movement, brought about profound change in global consciousness. Inequality and democracy were the new touchstones of this worldview, referenced by even the most conservative of commentators, now forced to use these frameworks. These mobilizations also brought a revival of public political conversations in North America, in which friends and strangers talked to each other about their dreams and how they envisioned a socially just world.

Building on these conversations, we asked our counterparts, collaborators, and supporters what social justice means to them. Their answers, some of which we share inside this Annual Report, tell us what social justice sounds like: resisting oppression, taking sides during struggle, ensuring enough for all, removing the obstacles to equal opportunity. These statements hearken to a vision for a more just world: one where all citizens are equal, are given the same chances to succeed, and have equitable access to resources; a world in which the well-being of people takes precedence over personal gain, and solidarity among individuals is paramount.

Through our work, Inter Pares has had the privilege of seeing these words made real, and knowing what social justice looks like. It is on the faces of young people in Peru who are creating a movement that reflects their aspirations for a democratic and vibrant country. It looks like activists in Burma, who through years of dedicated research, mobilization, and advocacy, are finally influencing decisions on dams, mines, and petroleum projects in their country, helping to prevent displacement and environmental destruction. It resembles Sudanese women whose tireless efforts to end discrimination against themselves and their daughters is a vivid testimony to their courage and dignity.

The powerful examples we have witnessed over years of social justice work based on building movements has affirmed for us the importance of solidarity, weaving links, and drawing inspiration from struggles in other parts of the world. Indeed, our belief in the power of people working together has been unshaken since our founding. When a group of Canadian activists created Inter Pares in 1975, they wanted to build an organization that worked together with people in the global South, that nurtured relationships with community-based groups, popular movements, and activists based on equality and common cause. Just as important as supporting change processes abroad has been taking a long hard look here in Canada – asking ourselves important questions about how our country might be facilitating or hindering progress elsewhere, about how we fit into the global picture, and how local issues faced here are intrinsically linked to challenges faced elsewhere.

As Canadians, we have options in the face of the world’s current political context. We can allow ourselves to be blinded by the fog of pessimism that so often reigns, and be convinced that there is little hope for profound change. Or – we can roll up our sleeves to work for social justice, reminding ourselves as Margaret Mead once said, that we must never underestimate the force of our commitment. Because by coming together, we become much stronger than when we stand alone.