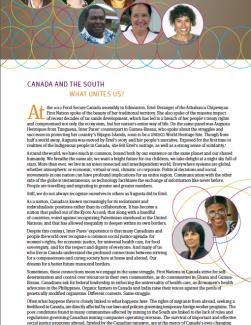 At the 2012 Food Secure Canada assembly in Edmonton, Eriel Deranger of the Athabasca Chipewyan First Nation spoke of the beauty of her traditional territory. She also spoke of the massive impact of recent decades of tar sands development, which has led to a breach of her people’s treaty rights and compromised not only the ecosystem, but her nation’s entire way of life.

On the same panel was Augusta Henriques from Tiniguena, Inter Pares’ counterpart in Guinea-Bissau, who spoke about the struggles and successes in protecting her country’s Bijagos Islands, soon to be a UNESCO World Heritage Site.

Though from half a world away, Augusta was moved by Eriel’s story and her people’s narrative. Exposed for the first time to realities of the Indigenous people in Canada, she felt Eriel’s outrage, as well as a strong sense of solidarity.

Around the world, we have much in common, bound both by our existence on the same planet and our shared humanity. We breathe the same air; we want a bright future for our children; we take delight at a night sky full of stars. More than ever, we live in an interconnected and interdependent world. Everywhere systems are global, whether atmospheric or economic, virtual or real, climatic or corporate. Political decisions and social movements in one nation can have profound implications for an entire region. Communication with the other side of the globe is instantaneous, as technology facilitates the exchange of information like never before. People are travelling and migrating in greater and greater numbers. Still, we do not always recognize ourselves in others as Augusta did in Eriel.

As a nation, Canada is known increasingly for its isolationist and individualistic positions rather than its collaboration. It has become a nation that pulled out of the Kyoto Accord; that along with a handful of countries, voted against recognizing Palestinian statehood at the United Nations; and that has allowed inequality to deepen within its own borders.

Despite this context, Inter Pares’ experience is that many Canadians and people the world over recognize a common social justice agenda: for women’s rights, for economic justice, for universal health care, for food sovereignty, and for the respect and dignity of everyone. And many of us who live in Canada understand the profound connections between striving for a compassionate and caring society here at home and abroad. Our dreams for a better future transcend borders.

Sometimes, these connections mean we engage in the same struggle.

First Nations in Canada strive for self-determination and control over resources in their own communities, as do communities in Ghana and Guinea- Bissau.
Canadians ask for federal leadership in enforcing the universality of health care, as do women’s health advocates in the Philippines.

Organic farmers in Canada and India raise their voices against the perils of genetically modified organisms.

Often what happens there is closely linked to what happens here. The rights of migrants from abroad, seeking a livelihood in Canada, are directly affected by our laws and policies governing temporary foreign worker programs. The poor conditions found in many communities affected by mining in the South are linked to the lack of rules and regulations governing Canadian mining companies operating overseas. The survival of important and effective social justice programs abroad, funded by the Canadian taxpayer, are at the mercy of Canada’s ever-changing aid policies.

This Annual Report contains stories of courage and conviction, giving a glimpse of the connections between Inter Pares’ social justice work in Canada and in the South. With your support, we continue to build common cause around the world.

Inter Pares advocates a role for Canada that is internationalist: one that cultivates solidarity, where we act with compassion and kindness, and reject isolationism, militarism and individualism. This perspective, shared by our supporters who are also global in outlook, is more important than ever.