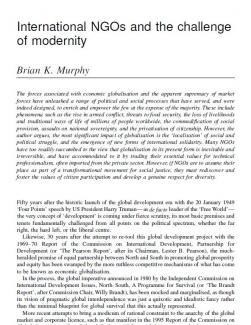 This paper was originally commissioned as a contribution to a special 10th Anniversary Edition of the international journal Development in Practice (Vol. 10, Nos. 3 & 4, August 2000).
The forces associated with economic globalisation and the apparent supremacy of market forces have unleashed a range of political and social processes that have served, and were indeed designed, to enrich and empower the few at the expense of the majority. These include phenomena such as the rise in armed conflict, threats to food security, the loss of livelihoods and traditional ways of life of millions of people worldwide, the commodification of social provision, assaults on national sovereignty, and the privatisation of citizenship.
However, the author argues, the most significant impact of globalisation is the ‘localisation’ of social and political struggle, and the emergence of new forms of international solidarity. Many NGOs have too readily succumbed to the view that globalisation in its present form is inevitable and irreversible, and have accommodated to it by trading their essential values for technical professionalism, often imported from the private sector. However, if NGOs are to assume their place as part of a transformational movement for social justice, they must rediscover and foster the values of citizen participation and develop a genuine respect for diversity.
Download (pdf 171.33 KB)