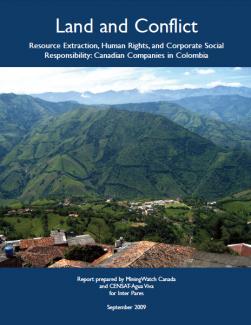 Canadian foreign direct investment in Colombia has grown consistently since the 1990s, particularly in telecommunications, mining, and fossil fuel extraction. Canadian mining and oil companies are major players in Colombia.

Despite a concerted public relations campaign by the Colombian government, Colombia continues to suffer widespread human rights abuses, including extrajudicial executions, disappearances, extortion, and threats. Control over land, labour, and natural resources are integral to the war and violence in Colombia, and the past few decades have seen massive displacement and murder for political and economic ends. Striking correlations have been observed between where investment – both domestic and foreign – takes place and rights abuses, ranging from murder and massacres and related massive land and property theft to violations of the rights to freedom of movement and to a healthy environment.

Human rights violations are linked to efforts by those behind Colombia’s murderous paramilitaries to create conditions for investment from which they are positioned to benefit. There are also ongoing relations
between the paramilitary forces and all levels of government and the armed forces, up to the highest officials, and there are clear indications that political cover for such human rights abuses and crimes will continue.

John Ruggie, UN Special Representative on human rights and transnational corporations, emphasizes that it is the responsibility of States to protect human rights while both State and non-State actors are obligated to respect human rights, and where appropriate, to remedy human rights violations.

The Colombian context presents especially difficult challenges for companies making investments to be able to protect or respect human rights standards and contribute positively to the overall human rights situation. Indeed, the high level of violence and the continued presence of paramilitaries in areas of high investment raises serious concerns that Canadian investment risks contributing to or exacerbating the violence, and risks benefiting from or being complicit with the human rights abuses and massive displacement that continue to occur. In such circumstances, where the State is not willing or able to protect human rights, the obligation on corporations to respect human rights becomes more critical, while at the same time more difficult to define and fulfil.