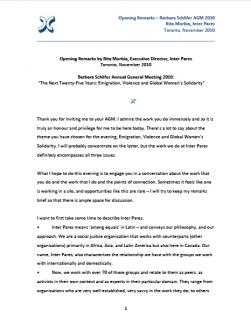 Women around the world learn from each other.

Many years ago at Inter Pares, we began hearing the exiled women’s organizations we work with on the borders of Burma speculate about what would happen when they returned to Burma. No one knew when that would be, but they wanted to anticipate and prepare for the issues they would face. How would they know it was time to return? What would the negotiations for that return look like?

Inter Pares had worked for many years with Guatemalan women’s organizations, who had been exiled in Mexico, and who had then organized while in exile and been part of the return process back to Guatemala. Now Guatemala and Burma are very far from one another and yet there were strong parallels between the women’s groups we were working with. So we organized an exchange and I had the privilege of accompanying both women from Burma to Guatemala and women from Guatemala to Thailand where we travelled along the border meeting women from Burma who lived both in and out of the camps.

Together, the Burmese and Guatemalan women traced their histories, their personal experiences, their struggles for democracy and for respect and recognition by men in their own movements. The Burmese and Guatemalans easily related to each other’s stories of violence and resistance, and the arduous journey to make their voices heard as women. They offered each other tangible advice and shared strategy as well as hope, strength, encouragement and inspiration.

Women spoke about how, paradoxically, being in refuge was “like a school” and how much they learned and were change by the experience. Burmese and Guatemalan women were both explicit targets of military violence. They sought asylum in neighbouring countries. They struggled to survive in exile and then organized as women to access services and participate in political organizations.

The Guatemalans spoke about the way they had organized politically. In most refugee situations, it is governments and international bodies who determine the conditions and logistics of refugee repatriation.

The Guatemalan situation was unique in that the refugees themselves, through a coordination body called the Permanent Commissions, negotiated directly with the Guatemalan government to determine the terms of their return. For the Guatemalan refugees, this was a central achievement; they were not passively “repatriated” rather their “return” was a voluntary, organized, political act witnessed by the world.

Guatemalan women also underscored the challenges. Despite how much was achieved during the negotiation process, not a single woman was present when the Accords were signed and the specific needs of women such as the right to co‐ownership of land were left out. As well, returning to Guatemala changed their struggle and effectively set it back. The material conditions upon return were poor and maintaining women’s organizations was difficult. Women were geographically dispersed making it difficult and complicated to get to meetings. And they suffered a backlash from some men in their return communities who believed there was no longer a need for women’s organizations and that a women’s place was now within the home.

The Guatemalan women also learned a lot from their sisters from Burma; Particularly around speaking out about sexual violence in the context of conflict. One of the most powerful moments I’ve experienced personally was browsing at a bookstore in the Chiang Mai airport with a number of Guatemalan women and finding a copy of License to Rape for sale. The way in which Shan women were breaking the silence on state-sponsored sexual violence was truly a revelation to all of us – and that the report had become so well‐known that it was sold at an airport bookstore was really awe‐inspiring.