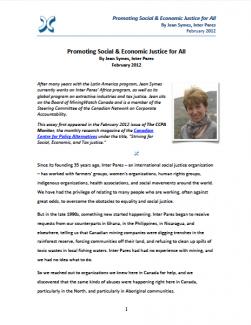 “We think the role of governments should be to orient their economic and social policies for the well-being of all. They should be accountable to citizens for the implementation of a just democracy. Instead, we see governments around the world supporting a global economy organized in the interests of speculators, and economy largely disconnected from how most people earn a living.

The last 30 years has seen a campaign by financial and political élites to eliminate as much regulatory oversight of national and international banking systems as possible. This deregulation led us to an economic collapse that continues to inflict enormous damage throughout the world. And that in turn led – in much of the North – to a bailout of banks and financial institutions, which is being paid for by cutting back social services, worker’s pensions, and health care. Now governments are using the crisis to justify further corporate tax cuts, and cuts to social services and investments.

In the global South, countries are experiencing decreased remittances from migrant workers, lower export revenues, rising unemployment rates, and steep increases in food and energy prices. An additional 130 to 155 million people have been pushed into poverty. More than a billion people go to bed at night hungry, and 50,000 people die every day from poverty and poverty-related causes.

There is a growing economic disparity in Canada as well. Current levels of economic inequality have not been seen here since 1929. Before the onset of the financial crisis in 2008, 3.5 million Canadians lived in poverty; and additional 1.8 million are estimated to have joined the ranks of the poor by the end of 2011. One in nine Canadian children lives in poverty, and for Aboriginal children, that figure is one in four. This is a tragedy and a national scandal."