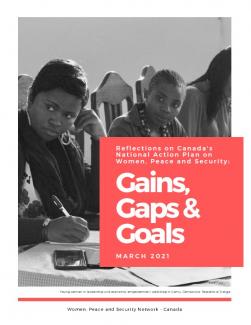 In the report, Network members consider what progress has been seen as a result of the CNAP in the last three years and reflect on elements that could be strengthened or incorporated into future CNAPs. In the chapter titled Reflections on the Intersection of Economic Justice and the Women, Peace & Security Agenda: Sudan and Colombia, Inter Pares’ Rita Morbia and Bill Fairbairn reflect on how Canada’s trade and investment agenda can harm women’s rights, especially when it lacks a strong legal and regulatory framework for Canadian companies operating abroad.

The report was released in the context of recently marked anniversaries related to WPS – the 20th anniversary of the adoption of the first United Nations Security Council Resolution on women, peace and security (1325); and three years since the Government of Canada launched its second National Action Plan on WPS (CNAP).