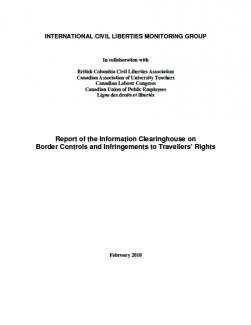 The International Civil Liberties Monitoring Group (ICLMG) supports legitimate efforts to combat terrorism which is in itself a serious attack on human rights, but argues that these efforts must always respect human rights norms. It is not possible to defend democracy, the rule of law and a culture of human rights by abdicating these very principles. Security and freedom are not opposites. Respect for fundamental rights is an essential condition and a vital component of security.

In early 2008, in cooperation with civil liberties groups and partners from the labour movement, the ICLMG established the Action-Research and Information Clearinghouse on Border Controls and Infringements to Travellers’ Rights. Its mandate was to document the impacts of “no-fly lists” and other government watch lists.

The Clearinghouse project aimed to:

• investigate the National Risk Assessment Centre (NRAC) travellers’ profiling operations, practices and systems, including their degree of harmonization and interoperability with the U.S. Terrorist Screening Centre, as well as the extent of the proliferation and nature of the various watch lists and databases used for risk assessment and border controls.

• establish a mechanism (the “Clearinghouse”) to collect, document and systematize information in cases of individuals encountering problems at airports and border crossings due to application of the no-fly lists, Canada Border Services Agency’s (CBSA) watch lists, and other watch lists, resulting in refusal of entry, secondary screening, or other measures that have a clear and very concrete impact on privacy rights and the rights of travellers.

Research on surveillance of travellers, border controls and watch lists began in March 2008 and is ongoing. The Clearinghouse was formally launched on June 18, 2008, on the first anniversary of the introduction of the Passenger Protect Program (PPP) – Canada’s no-fly list – with its own websites www.travelwatchlist.ca and www.surveillancedesvoyageurs.ca, and a toll-free line for travellers to tell their stories. These websites have allowed the collection of information from the public, and made possible the dissemination of information related to border issues, privacy and civil rights to a larger audience. The ICLMG, its members and partners have relied on the research findings to speak out against the deployment of new programs aimed at increasing the surveillance and monitoring of individuals. These include the U.S. Secure Flight program which threatens Canada’s sovereignty, Enhanced Driver’s Licenses (EDLs) with Radio-Frequency Identification (RFID), the increasing use of biometrics to identify and monitor travellers, and new technologies such as full body scanners that can see through the travellers’ clothing, threatening their privacy rights. Information collected via the websites and toll-free line and through ongoing research is being used for public education purposes, and to engage officials about abusive practices such as racial and religious profiling.