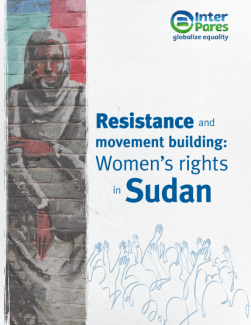 A new Inter Pares-commissioned study explores the perspectives of women’s rights activists at the centre of gender justice in Sudan.

Women in Sudan have experienced a tumultuous journey over the past several years.

During 30 years of a brutal dictatorship, the receptivity to progress on women’s rights – including making changes to a discriminatory judicial framework and reforming prevailing social attitudes – was extremely hostile. Women’s rights organizations navigated this precarious terrain by carefully strategizing and organizing, although activists often paid with their bodies and lives.

After leading the popular revolution that ended the dictatorship in 2019, women’s rights activists hoped for an authentic transition to democracy. They wanted an opening to express and exercise their political ambitions. However, the October 2021 military coup dealt their aspirations a serious blow and the space in which to assert their agency once again narrowed.

Where have all of these events left the women’s rights movement in Sudan?

Today, activists are increasingly at risk. Diversity is both a strength and a weakness for the movement but efforts towards feminist change and resistance continue.

This Inter Pares-commissioned study from a leading researcher in Sudan explores the strengths, gaps and lessons learned over the last several years of organizing through the perspectives of Sudanese women who have participated in the movement. It makes several recommendations for those who stand in solidarity with the feminist movement.

Over the last century, the women’s movement in Sudan has invented and reinvented itself. Through both collective action and individual activism, progress on issues of women’s rights has been hard-fought, won, and then lost again. Changes in power relations have been subject to colonial dynamics, as well as more contemporary political realities, i.e., revolutions and brief transitional periods that have interrupted long dictatorships.

Throughout it all, the common thread among women’s rights activists has been the anti-colonial struggle and demands for broad social, political, legal and economic reforms to the state’s patriarchal and autocratic norms – often upheld by mainstream pro-democracy movements.

The women’s rights movement in Sudan faces varied and persistent obstacles. In this repressive human rights environment, activism has put organizations and lives at risk. Religious fundamentalism is a constant barrier to progress and a danger to individual advocates. Partisan political interests have fractured the women’s movement and factors such as the “NGO-ization of feminism” has led to depoliticization and the instrumentalization of some groups. Geographic and ethnic power dynamics are a continuous presence influencing the success of collaboration and unity. The women’s rights movement is under constant and ruthless pressure externally and internally.

In the midst of this context, however, there are new and inventive forms of organizing. Women are forming myriad civil society organizations as platforms for change. They are working together in coalitions and alliances that have tested their trust, loyalty and camaraderie. More than ever, women are in the streets demanding that their rights be respected and their voices heard.

The study’s conclusions include the need to reframe success in movement-building spaces; the importance of understanding that fractures have been generational in the making and will continue to be so in their resolution; that for some, alliances can be disempowering and diversity of expression more relevant; and that dialogue and convening spaces are critical to make change happen even if they are ephemeral.

Inter Pares is grateful for the support of Global Affairs Canada (Peace and Stabilization Operations Program, PSOPs) in producing this report.