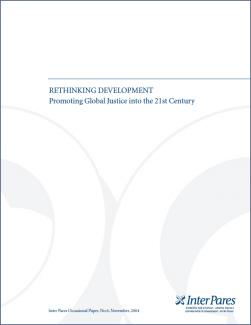 Change is, of course, inevitable. Change is always happening, in ways too complex for anyone to control.

Our mission is to affect the quality and character of change, to influence the trajectory of change to the benefit of society, nationally and globally. This includes working with others internationally to try to end the permanent emergency that consumes the lives of the majority on the planet, and the spiral of violence and militarism that dominates global politics today. It also implies finding, promoting and amplifying alternative visions of life, livelihoods and citizenship in the interests of the broad global community. It implies resistance, opposition, and proposition. It implies imagining another future and trying to promote and live that future daily.

In our work in Africa, Asia and the Americas – and in Canada – we see people taking hold of their rights and responsibilities as citizens to revoke arbitrary authority and demand moral, ethical and political leadership, by demonstrating such leadership in their communities and in advocacy with their governments and legislatures. The demographics of this new citizenship is also a profound shift. Global activism, long carried by an aging population, is increasingly led by the young, who now make up the vast majority of citizens in most nations; and by women, who have moved into the theatre of activist public citizenship as never before. At the same time, an inter-generational exchange among progressive citizen
activists is passing on a legacy of experience from old to young, and a momentum of change that is as durable as history. As part of this movement we see a convergence of interests, a commitment to democratic diversity, and a vision that “another way is possible”. We see people coming together to share experiences, values, dreams and actions within a new internationalist movement – a movement to announce a transcendent globalism as a positive and unifying force on the planet.

What we see happening in the world is the engagement of people as citizens, “doing politics” for the long term – engaged citizens with explicit proposals and structures of accountability. What we see emerging is a resurgent citizen activism, locally and globally – movements of people working together to re-appropriate their governments, their economies, and their societies. This action is responsible citizenship itself: first, to hold the state responsible for its deeds, ultimately to make government accountable in its form and substance, and to use government to develop progressive social and economic policy to the benefit of the entire community.

We have also learned that to support this shift on a global level requires a re-thinking of development, and a change of mind, of consciousness. We need to embrace diversity and challenge dichotomies – dichotomies like “us” and “them”, for example – that obscure the common destiny of all who share our planet.

Inter Pares and our colleagues around the world promote the values of health, creativity, and respect for life, and the ethics of care and community. What we call “development” is not a technical process. It is not technique and tools that will make the difference. What is required is an explicit internationalist movement for global cooperation within an ethos of universal respect, reciprocity and interdependent diversity – a new globalism based in hope and confidence, promoting cooperative international action to transform ourselves and with us, the world.