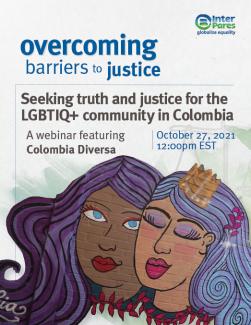 Colombia’s fifty years of armed conflict has left gaping wounds across the country, some of which are only recently coming to light. Colombia Diversa, Inter Pares’ counterpart, has played a key role in exposing how all armed actors specifically targeted LGBTIQ+ persons. According to their findings, these were neither isolated nor random attacks, but rather sustained practices rooted in patriarchal and systemic gendered inequality and entrenched cultural prejudices that helped armed groups win legitimacy among and exercise control over civilian populations.

Join us as we connect with Colombia Diversa to learn more about how they are seizing the transitional justice process to seek truth, justice and guarantees of non-recurrence for LGBTIQ+ victims and survivors.