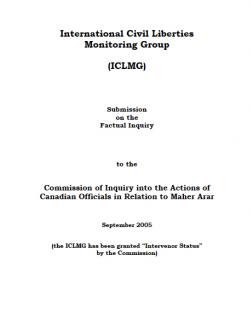 The heart of the inquiry

At approximately the same period of time from November 2001 to January 2004, four Canadians (Ahmad Abou El Maati, Abdullah Almaki, Muayyed Nureddin and Maher Arar) find themselves imprisoned, tortured and interrogated in Syria, all under similar conditions. Other Canadians report having experienced the same torment in the same context. The circumstances surrounding security intelligence sharing, the trips taken to Syria by the RCMP and by CSIS, the deportation to Jordan and then to Syria, the reticence of the intelligence agencies and of the RCMP to facilitate Maher Arar’s return to Canada, and the attitude as well as the behavior of the ambassador to Syria and the Solicitor General cannot avoid suggesting a strategy aimed at extracting and exchanging information from Canadian individuals who were victims of torture and cruel and unusual treatment. The final report of the Inquiry must answer this question if it is to fulfill its mandate: do the facts made public in these four cases demonstrate that the Canadian government carried out a pattern of “subcontracting” torture?