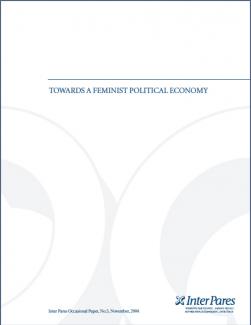 So globally universal is the rule of men – patriarchy – in the home, in the assembly, in the field, and in the marketplace, that this dominance and its attendant subordination of women is seen to be “normal”. Indeed, it is a universal norm even in modern, liberal and “liberated” societies such as
our own.

However, it is not just. It is not healthy, for women certainly, but neither for men. It is not healthy for the planet. And contrary to the induced consciousness of men and women both, it is not natural. It is an aberrant perversity against the human possibility. The crimes committed in all societies against women, the daily institutionalized violence against women, the dehumanization of woman, is a profound crime against humanity. It is at the heart of all fundamentalisms, at the core of militarism, and defines the daily context of the permanent emergency experienced by billions of woman and children around the world. A serious politics of global transformation and social change has to include the active goal of ending gender-based violence and inhumanity against women and children, and the transformation of patriarchy into an authentic inclusive democracy of all persons undefined by gender or sexuality.

For almost three decades, gender-based analysis and a feminist approach to methodology and programming have been direct and central within Inter Pares’ activity.1 At the same time, Inter Pares does not regard “women” or “women’s issues” as merely a sectoral issue or category. We consider the struggle for equality as a primary and fundamental independent variable that infuses our thinking and our activity. In this, borrowing from Andrea Dworkin and bell hooks, among others, we have defined equality as “one universal and common standard of dignity and opportunity for all, regardless of gender, of race, or of class.” This paper offers an elaboration of how this theme can inform and infuse international social justice activism.