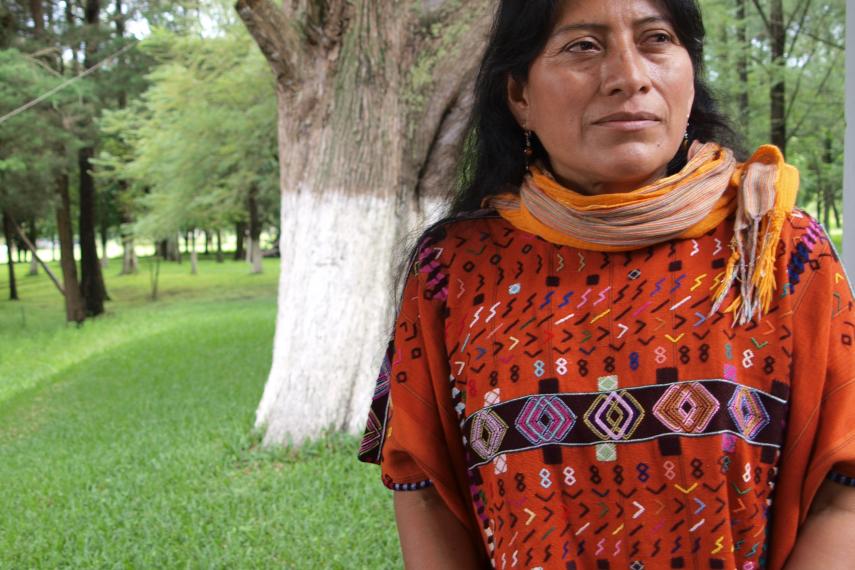 “All women deserve the right to a good life.”

Blanca Jiménez is a Maya Mam woman from the Huehetenango region of Guatemala, and believes deeply in women’s equality. As a child, she saw how her mother’s and other women’s work was devalued, and witnessed men mistreating women. As an adult, Blanca has suffered from sexism, racism, and machismo in her everyday life. She also experienced physical and sexual violence during the country’s 36-year armed conflict, which killed her husband and drove her and her children into exile in Mexico.

There, Blanca joined many other Mayan women refugees who organized to defend their rights and those of their communities. They became community leaders, and took advantage of openings created by the peace process to become political actors. When they returned to Guatemala in the mid-’90s, those same women faced backlash from men who wanted women to return to traditional roles and give up their newly claimed leadership. Undaunted, Blanca and others persisted, creating women’s organizations that helped women recover from the trauma of war, rebuild their communities, gain access to land, and nurture their personal and political leadership.

Alongside other Mayan women leaders, Blanca is promoting women’s equality in Guatemala.

Today, despite years of hard-earned progress, Mayan women are still plagued by sexism, racism, and discrimination. But as more women realize that these are shared struggles, their movement keeps growing. Blanca is now a leader and coordinating committee member of Movimiento de Mujeres Mayas de Huehuetenango (MMM), an alliance of Mayan women’s organizations. By joining forces, Mayan women have a stronger voice and influence in Huehuetenango. As Blanca states, MMM “helps me claim back my own rights, gives me strength to speak and work for women’s rights.”