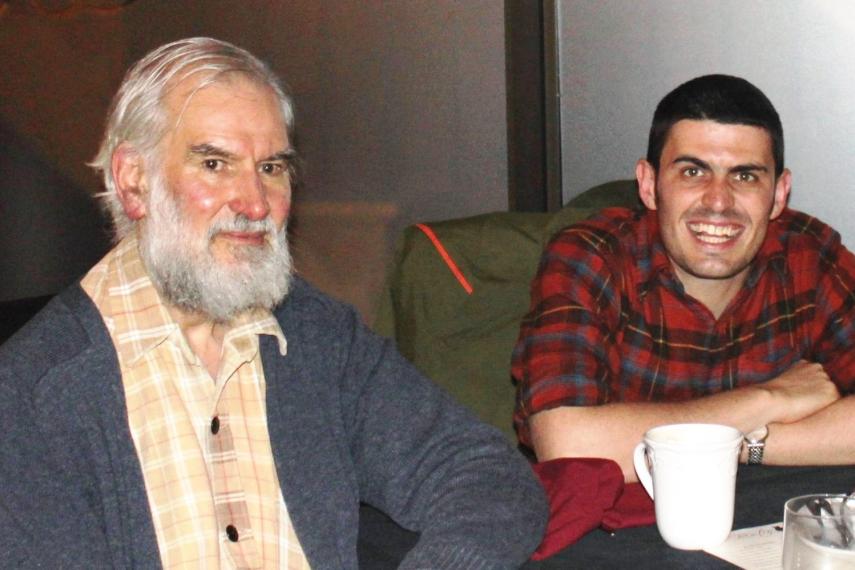 Inter Pares: Before we get into Inter Pares specifics, Geoff, can you tell us a bit about your background?

Geoff Evans: I was born in England, grew up in Ontario, studied applied mathematics, spent some time wondering what to do with it, and was lucky enough to get an offer to do marine ecology with it in Scotland.  While in Aberdeen, with my professional direction broadly set, I discovered that viola is my instrument and Amnesty International is something one can be a part of.  Before coming to rest in Newfoundland I had worked on research boats of four countries, performed in symphony orchestras of three, and worked with Amnesty groups in four.  My ecological research has concentrated on three areas: how do we feed ourselves from the sea and still respect its ecology; how does carbon flow through the ocean and across its boundaries, and how does this interact with global climate change; and how can we assess uncertainty without relying too much on background theory?

Inter Pares: And how did you first get involved with Inter Pares?

Geoff Evans: By accident. Two things happened at about the same time in 1986. First, I received two Inter Pares fundraising letters which, although they were nominally 'from' two different public figures, were roughly 90% identical. So they left me interested, but also sceptical.  Secondly, I read Filters against Folly, a book by ecologist Garrett Hardin (of 'tragedy of the commons' fame) in which he laid out different tests to which any proposal needs to be subjected: do the words make sense; do the numbers make sense; what would then happen in response?  Putting these trains of thought together, I sent a copy of the book to Inter Pares and asked what they thought about it.  I wanted to offer them a new and useful way of thinking; and I wanted a way to judge how they would respond to something possibly outside their comfort zone.

The outcome was an exchange of letters with Inter Pares staff member Brian Murphy where we quickly discovered that we agreed about the most important stuff, and that discussing what we disagreed on was both enjoyable and clarifying.  This exchange quickly established two of the reasons my relationship with Inter Pares has lasted and grown: you work in sensible ways; you take people, and interactions among people, seriously.  Brian had lots to do beyond cultivating one donor, but he was willing to give attention to it; he had no hesitation about being challenging rather than emollient - characteristics shared by other Inter Pares staff I have met.

Inter Pares: What has kept you supporting Inter Pares for three decades?

Geoff Evans: About the turn of the century, my engagement with international justice and development began to deepen.  I became involved with Amnesty International at the national level, first coordinating their work on North Africa, later as treasurer on their Executive.  Inter Pares showed in various ways that they wanted to interact with me.  Brian Murphy sent me a copy of his book Transforming Ourselves, Transforming the World. I had an opportunity to meet him in person in Ottawa. The regular Inter Pares Bulletins were always interesting.  Perhaps because of my marine ecology background I was invited to come and talk with Augusta Henriques of Inter Pares counterpart Tiniguena about their management of marine resources.  Inter Pares Executive Director at the time, Molly Kane, wanted to spend time with me when she came to St John's for a meeting of the Atlantic Council for International Cooperation.  Then during the Inter Pares 30th anniversary celebrations I got to see another praiseworthy side: Inter Pares’s willingness to bring counterparts together and then step out of the way and let them get on with it, believing that solutions are probably best devised and decided by those closest to and most affected by the issue.  Inter Pares sees this as part of their feminism; one can wish that in time it will be seen simply as part of being sensible.  I now hope to discover ways my time and skills can contribute to the work.

Inter Pares:  Geoff, can you tell us why equality and social justice matter to you?

Geoff Evans: Why do equality and social justice matter to me...  I wonder if anyone has given a non-circular answer.  I can only say that I wouldn't feel good about myself if I didn't do at least something about it.

Inter Pares:  What three words would you use to describe Inter Pares?

Geoff Evans: Of course three words can at best be signposts, but "thoughtful, enabling, reciprocal" would be informative ones.

This exchange [with Inter Pares staff member Brian Murphy] quickly established two of the reasons my relationship with Inter Pares has lasted and grown: you work in sensible ways; you take people, and interactions among people, seriously.