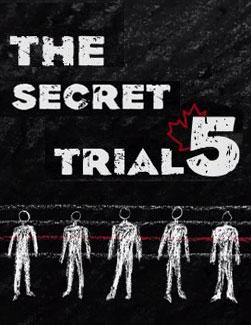 Join us for the sixth edition of Inter Pares Film Nights on September 10th! We will present The Secret Trial 5, a documentary that features the human impact of the “war on terror” in Canada.

The film examines the Canadian government’s use of security certificates, which allows for indefinite detention without charges, based on evidence not revealed to the accused or their lawyers. Over the last decade, this device has been used to detain five men and none has been charged with a crime or seen the evidence against them. Through the experience of the detainees and their families, the film raises poignant questions about the balance between security and liberty.

The screening will be followed by a discussion with Inter Pares Kevin Malseed, and Monia Mazigh, National Coordinator of the International Civil Liberties Monitoring Group, a national coalition that promotes civil liberties and human rights. Monia is also the spouse of Maher Arar, who was deported to Syria where he was tortured and held without charge for over a year. She campaigned vigorously for her husband’s release and later fought to re-establish his reputation and sought reparations.

You can't make it? Spread the word on Facebook or Twitter, and look at our Inter Pares fall lineup!