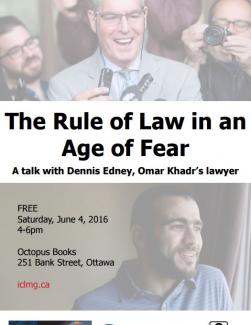 The International Civil Liberties Monitoring Group, in collaboration with Inter Pares and Octobus Books, invites you to a talk with Dennis Edney, an Edmonton-based lawyer who has been representing Omar Khadr pro bono for years.

Mr Edney will speak about Omar Khadr's case and the climate of fear surrounding the war on terror and how it has affected and continues to negatively affect human rights, due process, and the rule of law.

On May 7, 2015, after a 13-year imprisonment, Omar Khadr was finally freed on bail. His ordeal is far from over, however. There are two upcoming 2016 court challenges:

As urged by the United Nations' Committee Against Torture, the violation of Omar’s rights must be properly remedied.