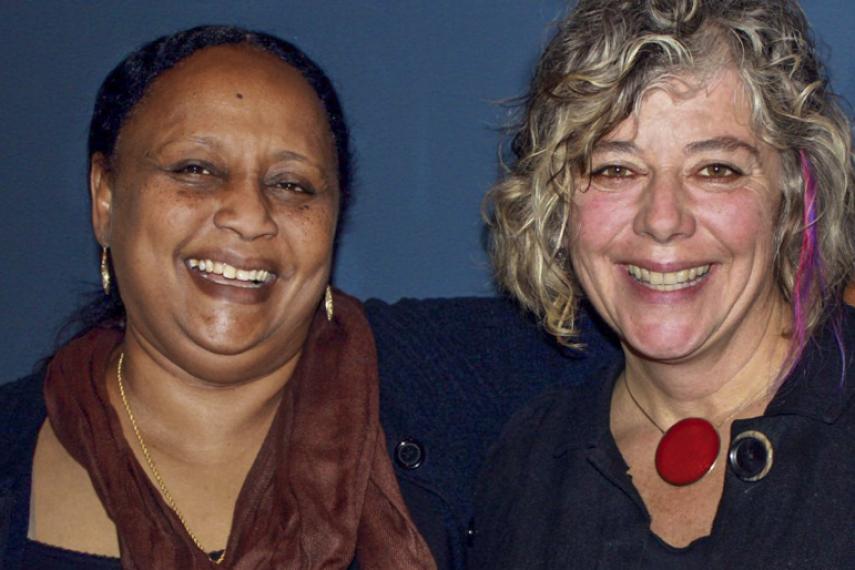 In 2008, when Asha El-Karib and Amanda Dale met for the first time in Khartoum, their discussions on family law and its impact on women’s lives were timely for both of them. Asha is the Executive Director of the Sudanese Organization for Research and Development (SORD), based in Khartoum, and Amanda is an Inter Pares Board member and Director of the Barbra Schlifer Clinic – a Toronto centre providing counseling, language interpretation, and legal support to women experiencing violence. When they met again in April 2012 in Ottawa during Inter Pares’ speaker series, Asha and Amanda talked about the commonalities of their shared struggle for women’s rights.

Amanda recalled that when she first met Asha, it had been a year since the women’s movement in Ontario had successfully brought changes to the Ontario Arbitration Act, a law originally created in 1991 to facilitate international commerce. The unintended consequences of the law were the empowering of religious tribunals to settle family matters, and the fact that this process would be legally binding – meaning that going through religious arbitration would mean losing all other legal recourse. For Amanda, the efforts to amend the Arbitration Act – ensuring that in Ontario, the settling of family disputes would only be based on Ontarian and Canadian laws – was a life changing-experience. “It was a five-year struggle that was the epitome of the fact that plurality of beliefs – culture, religion – did not have to be on a collision path with women’s rights.”

This struggle resonated with Asha and the work SORD continues to do to achieve women’s equality in Sudan. SORD began its work in 2007 by analyzing the laws affecting the lives of Sudanese women. They determined that family matters in Sudan – divorce, inheritance, child custody – were regulated by discriminatory laws premised upon women’s subordination. Advocating for changes in the family law became a core part of SORD’s work, because the organization recognized that women could never make true strides toward equality if they are oppressed in their homes. Amanda agreed with this focus: “Family law is the area of law that is the most difficult to improve because it is where culture is being passed on – not to say that culture is embedded in those violations, but culture is often being used to justify violence.”

As a result of their work, SORD’s members have been accused of opposing Islam and they have been attacked by Islamic fundamentalist groups in Sudan. But Asha maintains, “There is nothing in Islam or in Sudanese culture that legitimizes the discrimination of women or to treat them as minors… This is not about culture, it’s about patriarchy.”

The case of the Arbitration Act in Ontario and the battle to amend it demonstrates that no right should be taken for granted, even within secular democratic states such as Canada.

During our 2012 speaker series, Amanda reminded us that women’s access to justice needs to prevail, always. Asha couldn’t agree more.

The conversation between Asha and Amanda that started many years ago is still relevant and demonstrates the need to build an understanding about family law and how it impacts women’s rights around the world. Inter Pares remains concerned with the international rise of religious fundamentalisms – in all major religions – and the corresponding resurgence of strict patriarchal values.

Consequently, we will continue to support the global struggle for women’s rights and equality.

Family law is the area of law that is the most difficult to improve because it is where culture is being passed on – not to say that culture is embedded in those violations, but culture is often being used to justify violence.