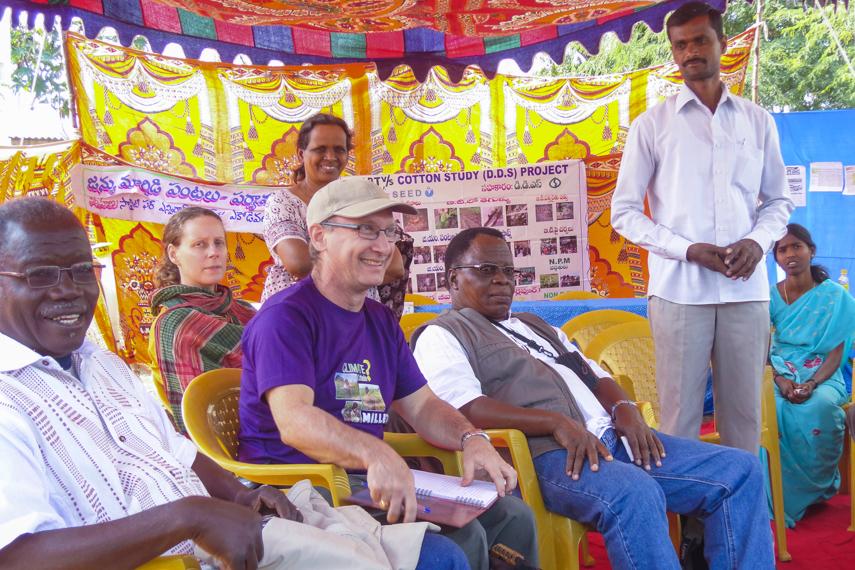 In January 2012, Inter Pares staff members David Bruer and Eric Chaurette traveled to Andhra Pradesh, India, to participate in an exchange they had organized to bring Asian and West African activists together to share knowledge and strategies to promote ecological agriculture and food sovereignty. The following is a short account from David’s perspective.

West Africa and Southern India, on the face of it, do not seem to have a lot in common. I work with counterparts in Asia, and my colleague Eric with groups in Africa, and yet we always seem to find ourselves talking about the same issues – concern over the introduction of genetically engineered seeds, the importance of local varieties of crops, and the struggle to maintain biodiverse agriculture in the hands of farmers.

When we proposed to the Deccan Development Society (DDS) in India, and to the Coalition pour la protection du patrimoine génétique africain (COPAGEN) in West Africa, an exchange where they could come together to discuss these issues, they both agreed on the spot; the DDS-COPAGEN exchange was born.

A few months later, in January 2012, Eric and I met up with four members of COPAGEN at DDS’s agricultural research centre in Andhra Pradesh. COPAGEN staff were enthusiastic to see the work of DDS and to share what they were doing in their countries – none more so than René Segbenou, a rural sociologist from Benin, West Africa, whose desire to learn and share epitomizes what exchanges are all about.

The next day we were thrown into DDS’s annual Biodiversity Festival – a joyous, loud, colourful gathering of women farmers leading a caravan of elaborately decorated bullock carts from town to town. These farmers are proud of what they know and do, and eagerly share their knowledge and seeds with others. Through music, songs, dance, and film, they attract residents and share their message about the importance of biodiversity and the millet-based agriculture they practice.

Later on, the exchange included a broader international symposium examining the implications of  genetically engineered crops on small farmers in Africa and Asia. During the two-day event, we heard the testimony of farmers and other experts from India who explained how  genetically engineered cotton had raised all of their costs but not their yields, leading to an epidemic of farmer suicides. This tragedy only reaffirmed the participants’ strong commitment to the movement against the corporate control of agriculture, and the need for farmers’ control of their land, their seeds, and their ways of farming – their food sovereignty.

While in India, COPAGEN took the time to document DDS’s experience in farmer-led research on the impacts of genetically engineered cotton. For René, the most important lesson was how to involve the farmers in the study so that they become co-researchers. He explained how “when farmers participate in the collection and analysis of data, they also become creators of solutions.”

A few days later, standing under the scorching sun in a bone-dry field, we marveled as local farmer Chendramma Bidakanne showed us the huge variety of rain-fed crops she grew on her land. There were many varieties of millets, mixed with other crops so that if one failed another would thrive, and if the price of one slumped, she could sell another at a good price. As René put it:

“At first you think it is a miracle, but when you listen to this expert woman, you come to understand. Even on completely dry and cracked soil one can obtain this great harvest. The sparse rain and the dew that falls in the night are sufficient for these well-adapted crops. We don’t need  genetically engineered crops to resist drought or to feed ourselves. When you read this in academic papers, it appears to be a fantasy, but seeing it with your own eyes, you understand and you become convinced. The only thing that can prevent our success is not having the courage to act!”

Standing in the field, René reflected, “This is how farmers in my country used to farm. Some still do, but many stopped because people say millets are only for the poor and we should adopt high-tech seeds and modern agriculture.” Chendramma smiled: “Then you must help them to learn again what they did before.”

Over a delicious lunch in Café Ethnic, an organic restaurant run by DDS to promote millet cuisine, Sandeep from DDS explained that “millet is a concept.” Millets can be grown as a monoculture on an industrial scale, as the Indian government is promoting, but that is not what DDS is about.

For DDS, promoting millets means promoting small farmers, about growing a diversity of crops, about using your own locally adapted seeds, about farming ecologically and rejecting the control of corporations over agriculture. Sandeep coordinates the Millet Network of India (MINI), which uses education and advocacy to take this message to regions across the country. It was a message that clearly resonated with COPAGEN. As we started talking about how to take this movement to West Africa both sides suggested forming “the Afro-Asian Millet Network.”

For India, West Africa, and the world, millet farmers like Chendramma represent an alternative to agriculture controlled by corporate interests. They are recreating the biodiverse agriculture that feeds both land and people, that is already adapted to whatever climate change will bring and that keeps agriculture in the hands of farmers. Inter Pares will continue to work with DDS and COPAGEN to build this alternative.

Inter Pares brought together counterparts from different regions to share experiences and learn from each other, resulting in ongoing plans for collaboration. 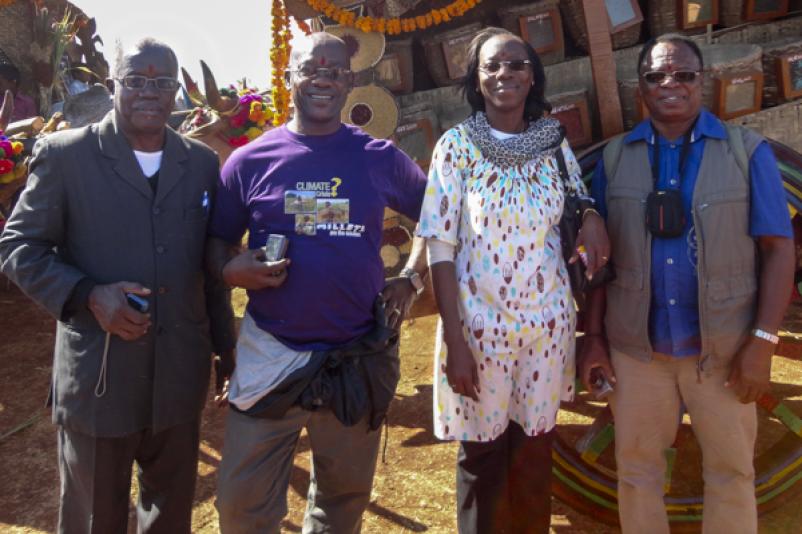