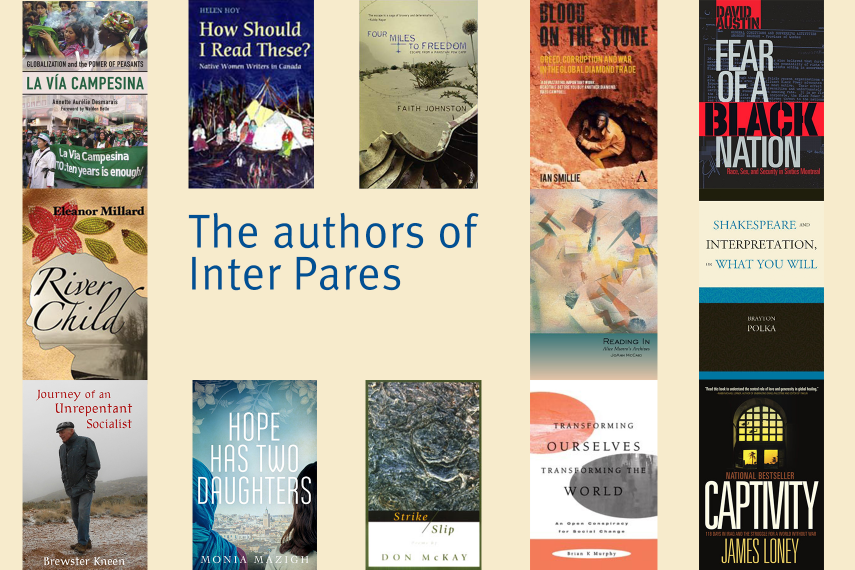 The authors of Inter Pares: Collage of book coversCredit: multiple

We would like to introduce you to some amazing members of the Inter Pares community, through the books they have published.

Monia Mazigh: Hope has two daughters
Weaving together the voices of two women at two pivotal moments in history, the Tunisian Bread Riots in 1984 and the Jasmine Revolution in 2010, Hope Has Two Daughters is a bracing, vivid story that perfectly captures life inside revolution. Monia has been an Inter Pares friend and collaborator for many years, including her years as National Coordinator of the International Civil Liberties Monitoring Group. She lives in Ottawa.

Don McKay: Strike /Slip
Don McKay’s 14th book of poetry walks the strike-slip fault between poetry and landscape, sticks its strange nose into the cold silence of geologic time, meditates on marble, quartz, and gneiss, and attends to the songs of ravens and thrushes and to the clamour of the industrialized bush. Inter Pares’ Margaret Fleming McKay Legacy Fund was named for Don McKay’s mother, in 1995. Don lives in Newfoundland.

Eleanor Millard: River Child
River Child is a story of healing and resilience, wrapped in the warmth and humor of Northern cultures. It is a collection of nineteen linked short stories about three generations set in the Yukon's Klondike, famous for its Gold Rush. Eleanor Millard has been an Inter Pares donor since 1979. She lives in Carcross, in the Yukon Territory. This self-published book can be ordered directly from Eleanor at emillard@northwestel.net.

Brewster Kneen: Journey of an Unrepentant Socialist
Brewster describes his book as his “political theological autobiography”, and he can be described not only as an unrepentant socialist but also as an active pacifist, a Christian “outside the walls”, and a genuinely original thinker. The book is a personal life-story with a focus on the 1950s and '60s, coming from someone who was active in the peace and social justice movements in the USA and Canada over the past 5 decades or so. The Kneen family are long-time Inter Pares friends and collaborators.  Brewster is based in Ottawa.

James Loney: Captivity: 118 days in Iraq and the Struggle for a World Without War
In this book James shares the story of the paradox of going to Iraq as a pacifist on a mission of peace, then being kidnapped, threatened with death and held hostage with three other men until they were rescued in a military operation. He explains why he remains committed to the principles of nonviolence despite the fact that a member of his group was murdered and their freedom was secured by armed force. James is a member of Inter Pares board of directors. He lives in Toronto.

David Austin: Fear of a Black Nation: Race, Sex, and Security in Sixties Montreal
In the 1960s Montreal became what seemed an unlikely centre of Black Power and the Caribbean left. In October 1968 the Congress of Black Writers at McGill University brought together well-known Black thinkers and activists from Canada, the United States, Africa, and the Caribbean. Within months of the Congress, a Black-led protest at Sir George Williams University (now Concordia) exploded on the front pages of newspapers across the country. David Austin was a member of Inter Pares board of directors from 1999-2010. He lives in Montreal.

Annette Desmarais: La Vía Campesina: Globalization and the Power of Peasants
In 1993, 46 farm leaders from various countries met in Mons, Belgium, determined to develop a strategy to challenge the devastation caused to their communities by a neoliberal international economic agenda. Over the next decade they and millions of peasants and small-scale farmers around the world used La Vía Campesina to forge a powerful and radical force of opposition. This book accompanies La Vía Campesina in a struggle to keep people on the land, producing food and culture, and building viable communities. Annette is a member of Inter Pares board of directors, and she lives in Winnipeg.

Helen Hoy: How Should I Read These?: Native Women Writers in Canada
This book raises and addresses questions around 'difference' and the locations of cultural insider and outsider in relation to seven books by contemporary Indigenous women authors in Canada. Drawing on post-colonial, feminist, post-structuralist and First Nations theory, it shows that these Indigenous authors have refused to be confined by identity categories such as 'woman' or 'Native,' and have themselves provided a critical voice guiding how their texts might be read and taught. Helen Hoy has been an Inter Pares donor since 1982, and lives in Guelph.

Faith Johnston: Four Miles to Freedom: Escape from a Pakistani POW Camp
Based on interviews and other sources, Four Miles to Freedom is the moving, sometimes amusing account of how twelve fighter pilots from different ranks and backgrounds coped with forced intimacy and the pervasive uncertainty of a year in captivity, and how they came together to organize an escape from a POW camp in Rawalpindi. Faith has been an Inter Pares donor for over 15 years, and she lives in Winnipeg.

JoAnn McCaig: Reading In: Alice Munro’s Archive
Using a feminist cultural studies approach, JoAnn McCaig “reads in” to the archives of acclaimed Canadian short story writer Alice Munro in order to explore precisely how the terms “Canadian,” “woman,” “short story,” and “writer” are constructed in her writing career. This book was published by Wilfrid Laurier University Press in 2002.  JoAnn has been an Inter Pares donor for over 15 years, and is the owner of Shelf Life Books in Calgary.

Brian Murphy: Transforming Ourselves/Transforming the World: An Open Conspiracy for Social Change
This book is for all those community workers, adult educators, and social activists of every kind who want to overcome pessimism and play a part in changing society in the direction of peace, justice and dignity for all human beings. Murphy explains the social and personal dilemmas which hold people back from social engagement. He argues that the various constraints we face can be overcome. Human beings are open-ended ‘possibilities in process’ - the missing link between a deterministic past and an intentional and conscious future. Brian has always been part of Inter Pares, and was a member of staff from 1979-2006.

Brayton Polka: Shakespeare and Interpretation, or What You Will
Brayton Polka takes both a textual and theoretical approach to seven plays of Shakespeare: Macbeth, Othello, Twelfth Night, All’s Well That Ends Well, Julius Caesar, Troilus and Cressida, and Hamlet. He calls upon the Bible and the ideas of major European thinkers, above all, Kierkegaard and Spinoza, to argue that the concept of interpretation that underlies both Shakespeare’s plays and our own lives as moderns is the golden rule of the Bible: the command to love your neighbor as yourself. Brayton has been an Inter Pares donor since 1986. He lives in Toronto.

Ian Smillie: Blood on the Stone: Greed, Corruption and War in the Global Diamond Trade
Africa’s diamond wars took four million lives. They destroyed the lives of millions more and they crippled the economies of Angola, the Congo, Liberia, and Sierra Leone. The biggest UN peacekeeping forces in the world—in Sierra Leone, Liberia, the Congo, and Côte d’Ivoire - are the legacy of “conflict” or “blood diamonds.” Blood on the Stone tells the story of how diamonds came to be so dangerous. It describes the cartel, the warlords, the gun runners and the shadowy traders who populated Africa’s bloody diamond wars, and a faltering, decade-long effort to clean up an entire industry.  Ian Smillie is a co-founder of Inter Pares, and he is based in Ottawa.