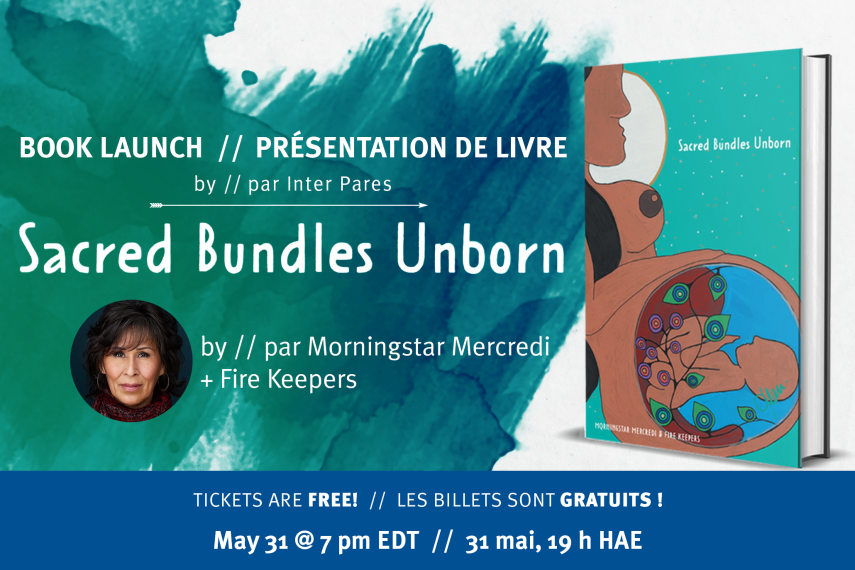 Join us for a free, virtual book launch for Sacred Bundles Unborn.

Canada’s colonial past and present are an ongoing source of painful revelations. Sacred Bundles Unborn is an essential collection of essays that converge around one of these horrific truths: the ongoing practice of forced sterilization of Indigenous women.

Inter Pares is proud to present the virtual launch of Sacred Bundles Unborn with author and activist Morningstar Mercredi on Tuesday, May 31 at 7 pm EDT.

This free virtual launch event will feature Morningstar and two of the book’s other contributors, Senator Yvonne Boyer and lawyer Alisa Lombard. Each of them is advancing justice for survivors of forced sterilization through their work.

The event will also feature a brief documentary with a video message from book contributor Victoria Saccsara, an Indigenous Quechua woman who has spent years advocating for herself and other survivors of forced sterilization in Peru. Inter Pares is proud to support her work for reproductive justice.

The event will close with an audience Q&A, facilitated by Inter Pares Board Chair Amanda Dale.

Simultaneous English-French interpretation will be provided.

Written by Morningstar Mercredi – herself a survivor of forced sterilization – and a network of storytellers called Fire Keepers, Sacred Bundles Unborn gives long overdue acknowledgement to those who have come forward with their stories of medical abuse. The Fire Keepers are a group of lawyers, poets, advocates, scholars, medical professionals, mothers and more – most of whom are Indigenous women. Each Fire Keeper writes about forced sterilization from their unique perspective.

“The goal of our collective, first and foremost, is the documentation of this ongoing genocide in order to bring to the forefront of readers’ consciousness this archaic and barbaric atrocity that continues and is not criminalized in Canada.” – Morningstar Mercredi

Learn more about the book at sacredbundlesunborn.com

Morningstar Mercredi is an Athabasca Chipewyan First Nation member in Treaty 8 Territory whose advocacy work spans more than forty years. As a survivor of sterilization, she advocates to criminalize forced and coerced sterilization of Indigenous women in Canada. Morningstar’s gift as an oral storyteller naturally evolved into various genres of writing and film, including two previous books: Morningstar: A Warrior’s Spirit and Fort Chipewyan Homecoming. She regards herself as perfectly imperfect, a constant work in progress, with no ambition to be anyone other than herself.

Yvonne Boyer is a Michif who is member of the Metis Nation of Ontario with her ancestral roots in the Metis Nation of Saskatchewan, Manitoba and the Red River. She acknowledges her Chippewa, Nehiyawak and Treaty 1 territory roots as well as her Irish ancestry. She was appointed to the Senate of Canada in 2018 to represent the province of Ontario and is the first Indigenous Senator from the province. Prior to her appointment, she was the Associate Director for the Centre for Health Law, Policy and Ethics and part-time professor of law at the University of Ottawa.

Alisa Lombard is a multi-lingual lawyer practicing specific claims, human rights and civil litigation on behalf of Indigenous Peoples. She represents Indigenous women in collective actions against those responsible for their forced sterilization and other forms of obstetric violations. A citizen of the Mi'kmaq Nation, her legal expertise centres around matters involving power inequalities and structures designed to address them. Her academic research focuses on the reproductive injustices suffered by Indigenous women worldwide, and the constitutional accountability of medical professionals, and their regulators, in law.

Victoria Saccsara is president of the Sumaq Wayta Association of Women Victims of Forced Sterilization of Ayacucho, in the rural, Indigenous community of Maucallaqta in Peru. Victoria is a survivor of forced sterilization, a practice carried out deliberately by Peru’s Alberto Fujimori government in the 1990s. Under the pretext of eradicating rural poverty, up to 300,000 people – the majority rural Indigenous women – were subjected to involuntary tubal ligation.

Inter Pares has had the privilege of supporting Victoria through our local counterpart organization, SISAY. Victoria’s organization, comprised of survivors of forced sterilizations in Peru, advocates for justice and reparations for all those affected by this crime.

Amanda Dale, chairperson of Inter Pares’s Board of Directors, is an international human rights scholar and activist, with a specialization in access to justice and women's human rights.