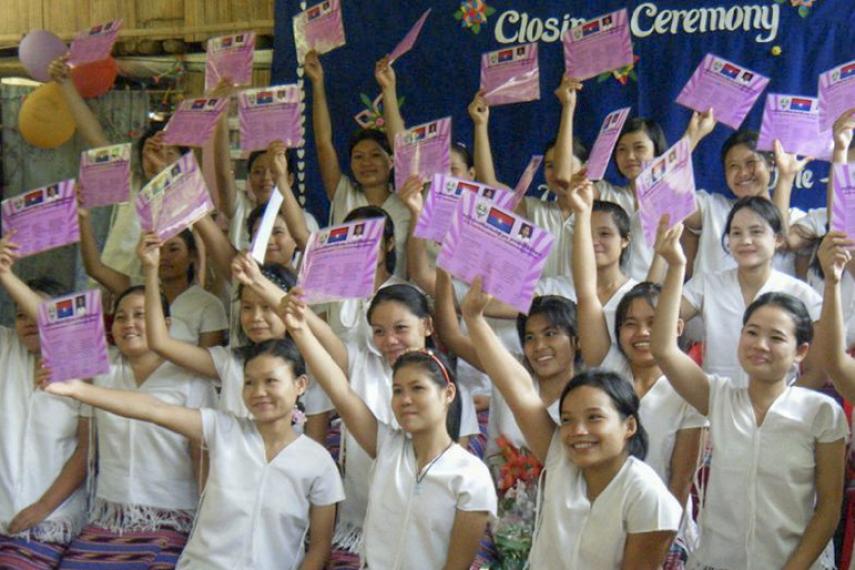 If you have built castles in the air, your work need not be lost; that is where they should be. Now put the foundations under them. — Henry David Thoreau

In April 2012, a historic meeting took place. Aung San Suu Kyi, Burma’s democracy leader and now a Member of Parliament, and Zipporah Sein, a women’s rights activist and now the head of the Karen National Union (KNU), were able to meet for the first time. The Karen are the third-largest ethnic group in Burma, and the KNU, their largest political party, has led a decades-long struggle for self-determination. The lives of these two incredible women have been deeply affected by repressive politics and brutality in their country. This meeting was a significant moment in their aspirations for a peaceful and democratic nation – a dream which has at times seemed like a far-off castle in the air.

Since 1991, Inter Pares has been working with people from Burma, a country that has been in conflict since independence. Various forms of military-backed governments have wreaked havoc upon the country, entrenching systematic corruption, violence, and impunity. An election in late 2010, and subsequent gestures of reforms by the nominally civilian government, have inspired cautious hope that Burma is on the cusp of peace and democracy.

“All of us look at the changes that are beginning to happen in Burma with great hope and hesitation,” the Karen Women Organization (KWO), an Inter Pares counterpart, recently wrote. “There have been so many false starts and shattered dreams … KWO cannot predict the future … but we also cannot wait until the change is certain.”

Before being elected leader of the Karen National Union, Zipporah was head of KWO. KWO activities include providing training and support to women in Karen State and in refugee camps to promote women’s leadership and political participation, and to prevent violence against women.

Inter Pares supports the work of over fifty community-based organizations from Burma. Like KWO, none of them are simply waiting for change. They are all building the foundation for the “castle in the air” – the castle of peace, democracy, and respect for human rights.

We support people from Burma working together to protect the environment and to provide food and health care to their own communities. We support people working to empower women, to document human rights abuse and to provide news and information in their own languages. These groups are incubators of democratic practice, applying principles of participation, gender equality, and accountability to their constituencies. By collaborating among different ethnic nationalities, they overcome mistrust as they explore solutions to common problems. Informed by their stories and policy recommendations, Inter Pares raises awareness about the situation in Burma with the Canadian public and our government.

In 2002, KWO participated in an exchange coordinated by Inter Pares. Women from Burma and Guatemala learned about striking parallels in each other’s struggles: ethnic discrimination, armed conflict, displacement, and violence against women. They shared not only powerful personal stories but also strategies for negotiating peace, raising difficult issues such as sexual violence and the challenge of promoting women’s rights “post-conflict.”

In 2007, KWO participated in a roundtable organized by Inter Pares in which counterparts from Latin America, Asia, and Africa strategized on addressing violence against women. More recently, we have been supporting KWO’s efforts to ensure that women participate in any transition to peace and democracy in Karen State.

KWO’s work on women’s political participation and Zipporah’s subsequent political leadership have had a dramatic impact on the  KNU-led peace talks with Burma’s military-backed government. That women are participating in these talks and that there is a grassroots consultation process are evidence of KWO’s long-term efforts to build a democratic society which values and respects women.

These groups are incubators of democratic practice, applying principles of participation, gender equality, and accountability to their constituencies.