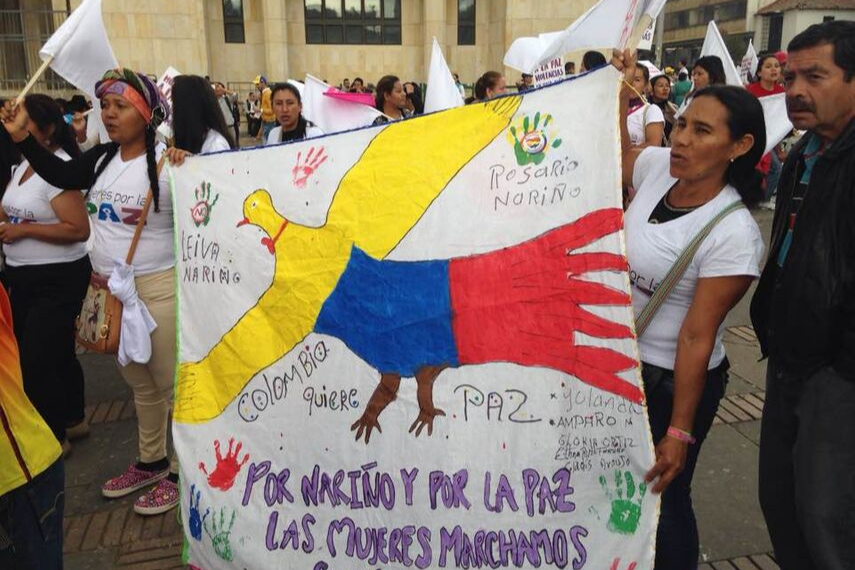 On the eve of the International Day of Peace, the undersigned Canadian organizations are joining to express their profound concern over an escalating human rights crisis in Colombia and continued threats to the Colombian peace process.

In 2016, a historic peace agreement was reached between the Government of Colombia and the Armed Revolutionary Forces of Colombia (FARC), with great hope of bringing an end to 52 years of armed conflict. Less than one month ago, the peace process was dealt a serious blow when several former commanders and now dissidents of the demobilized FARC announced their return to arms. They cited a lack of compliance by the Colombian state with the peace agreement and the systematic killing of social leaders and demobilized FARC members.

By all accounts, President Duque and his political party have systematically undermined the peace agreement. They have consistently underfunded several of its key components, openly attacked the transitional justice system, and moved slowly on reintegration of ex-combatants into civilian life. Disturbingly, they have promoted and enacted legislation that is in direct opposition to the agreement, in particular with respect to the provisions related to agrarian reform and rural development – issues that gave rise to the armed conflict and that are vital to a sustained peace. Prodded by the United States administration, the Duque government has also abandoned the agreements related to crop substitution. All of these measures have had a disproportionate impact on rural women, Indigenous and Afro-Colombian populations.

We are deeply concerned that little or no action has been taken to constrain paramilitary death squads that continue to threaten and kill community leaders with impunity. Since the peace agreement was signed in September 2016, at least 700 social movement leaders and 142 demobilized insurgents have been murdered1. During the same period, an additional 260,000 Colombians were forcibly displaced2, bringing the total number of internally displaced persons (IDPs) in Colombia to approximately 7.8 million – the highest number of IDPs in the world3. In June of this year the United Nations Special Rapporteur for Extrajudicial Executions, Agnes Callamard, called on the Colombian government to “cease inciting violence” against demobilized FARC members4.

As Canadian organizations, we reiterate our solidarity with the people of Colombia and their desire to build a country where peace and justice prevail, and where deeply entrenched political, economic and social inequalities are addressed. We share their conviction that the peace agreement is an important step in this process and that it must be vigorously defended.

We call on the Government of Canada to use its close relationship with Colombia to:

We urge the Government of Canada to redouble its political and economic support for peacebuilding initiatives in Colombia and ensure that Canadian trade and investment interests in Colombia are in no way undermining the peace process.

Promoting trans-inclusion through art in Colombia