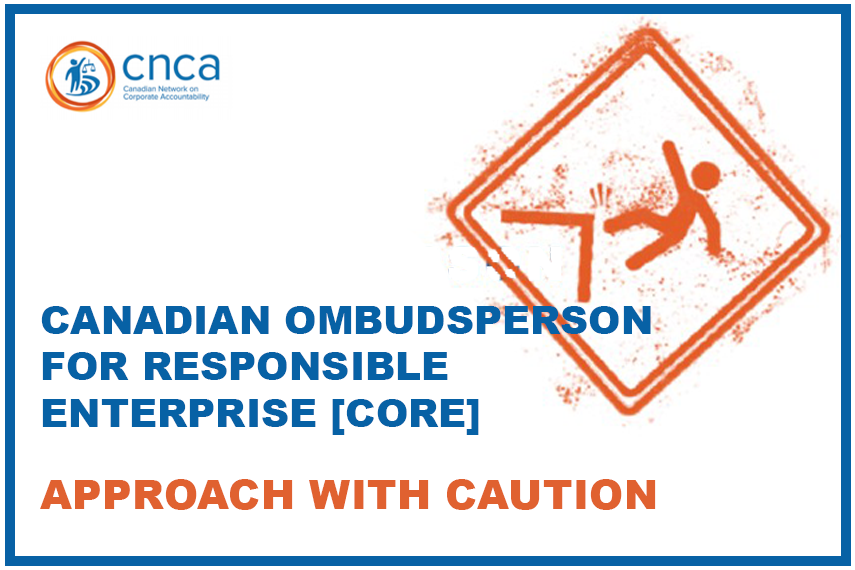 Canada’s Ombuds for Responsible Enterprise still has no teeth.

That is the conclusion of the 40+ members of the Canadian Network for Corporate Accountability in our new release Canadian Ombudsperson for Responsible Enterprise (CORE): Approach with Caution. In two short pages, CNCA summarizes why the current Ombudsperson’s office is unfit for purpose, and what changes it would require to do its job effectively.

In the brief, CNCA compares the office the Canadian government committed to in January 2018 with the office that it actually established in April 2019.

Among its fundamental flaws are the following:

CNCA notes that Canada has already created two similar offices with similar deficits. Both have utterly failed to provide support, justice or restitution for people who have suffered wrong-doing by Canadian corporations operating overseas. The Corporate Social Responsibility Counsellor, the precursor to the CORE, was quietly closed in recognition of its ineffectiveness.  Canada’s National Contact Point for the Organisation for Economic Co-operation and Development Guidelines for Multinational Enterprises (NCP), has not been known to improve the situation of any complainant, and in some cases, has made their situations worse – and is now listed by the CORE as a “partner”. Given this, the CNCA cautions communities that there is no evidence that the CORE can be a reliable and effective investigative body.

It is clear that the CORE that we now have in Canada is neither the office that was promised and which civil society celebrated in January 2018, nor that Canadian groups and impacted communities have demanded for over a decade.

As an active member of the CNCA, Inter Pares continues to advocate for an Ombudsperson that is truly designed to meet the needs of communities harmed by Canadian companies overseas.