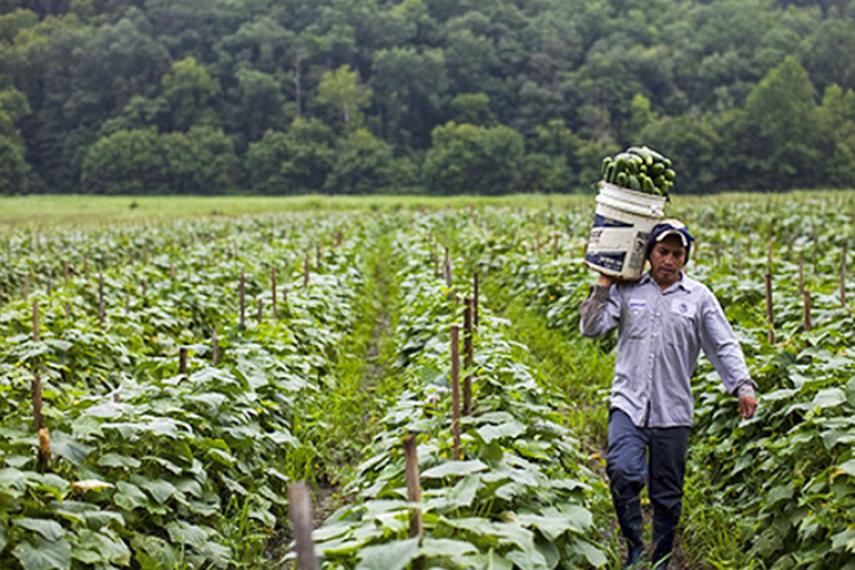 In the summer of 2012, Vivian Séguin was visiting her local farmers’ market in Ontario. While browsing the stalls, she chatted with the farmers.

When he indignantly asked if it was because she was prejudiced against migrant workers, she answered, “No, I’m prejudiced against the Canadian farmers who exploit them” – and promptly left, to applause from fellow shoppers.
Vivian’s question was prompted by her participation in Inter Pares’ “Just Work?” campaign, which explored the connections between the food we eat and the workers who travel each season from their homes in the global South to produce it. While many farmers treat their employees fairly, temporary foreign worker programs create a systemic vulnerability for migrant workers. Workers’ visas are tied to their employers, making it risky for them to speak out. There is too little oversight of working and housing conditions, and the program does not provide a path to permanent residency for those who would like to stay.

The four-month campaign took place during the summer and fall of 2012. During this time, Inter Pares explored these issues through a blog and other social media, and shared inspiring examples of grassroots migrant mobilizing.

Raising funds for this work gave us another opportunity to connect with people who care about these issues. The fundraising and social media campaigns engaged Inter Pares supporters like Vivian and the general public, encouraging them to reflect and take action on this issue.

As part of the campaign, Inter Pares planned a nine-city tour of migrant worker advocates based in Guatemala. The participants were José Sicajau, President of the Association of Guatemalans United for our Rights (AGUND) – an organization supported by Inter Pares and that is comprised of former migrant workers to Canada; Diego Lorente of Project Counselling Service (PCS) and Father Juan Luis Carbajal, Director of the Office of Human Mobility of the Roman Catholic Bishops’ Conference in Guatemala. Once in Canada, they were able to talk to migrant justice activists, food sovereignty activists, and to community members in Quebec, Alberta, and across southern Ontario.

In their public presentations, Fr. Juan Luis, José, and Diego spoke about not only the distressing reality of migrant workers, but also about the need to change national and provincial policies and regulations. In these conversations, people discussed how they were promoting, or could promote, justice for migrant workers in their own lives.

Today, Inter Pares is continuing to explore ways of promoting collaboration between the migrant justice and food justice movements, as well as ways to engage more Canadians in this conversation.