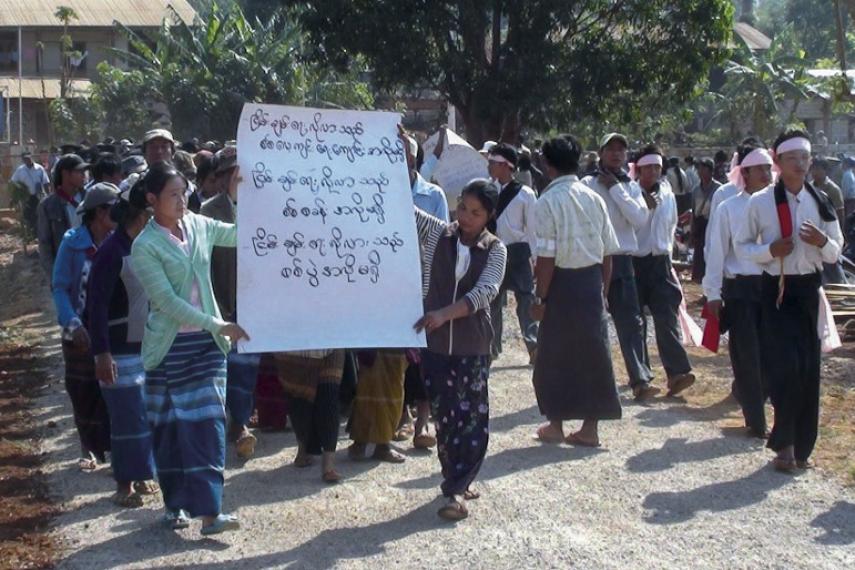 Karenni State: Villagers carry their petition for the closure of an army training centre built on stolen land.

An old proverb states that “when elephants fight, it is the grass that suffers.” Burma’s military took this proverb a step further. For decades, it attempted to undermine the armed opposition by burning villages, ordering civilians into garrisoned relocation camps as forced labour, and hunting and shooting those who disobeyed. Civilians are often targeted during conflicts, only to be excluded from peace negotiations. It’s therefore not surprising that ceasefire agreements usually address the interests of combatants, and ignore the voices of people dispossessed by the conflict.

Since 2011, new ceasefire negotiations have progressed between Burma’s government and many opposition forces. Government negotiators are sticking to tactics they developed in the 1990s including evading negotiations on human rights, military accountability, or ethnic aspirations to federalism. They only discuss troop positions or infrastructure and resource ‘development’ projects. Similar negotiations created the 1994 ceasefire in Kachin State, which led to uncontrolled resource exploitation by the military and its associated companies without civilian consultation. According to the Kachin Development Networking Group (KDNG), an Inter Pares counterpart, “forests were depleted, the waters were poisoned, and the course of rivers completely changed. Troops from Burma’s military poured in, confiscating lands” and using civilians as forced labour. Many of the dispossessed migrated “to squalid mining camps … many young women have been trafficked to China … Drug abuse is now rampant in mining areas.” Tensions mounted, leading to the resumption of armed conflict in 2011. Since then, 100,000 Kachin civilians have been displaced, with little hope of return in sight.

KDNG told their story to warn ethnic groups now in ceasefire talks: first, that agreements must address political rights and not merely dish out ‘development’ concessions; and second, that civilian voices must have a role in negotiating peace.

Some of the community-based organizations that Inter Pares has supported for many years are working to change this pattern. Dozens of groups from many different ethnic regions have come together to share expertise and ideas, and draft policies which they hope will influence ceasefire agreements and future development plans. They have also been engaged in discussions with both armed and political opposition groups to articulate villagers’ concerns on issues like land rights, forced labour, and landmine contamination. In at least one case, an ethnic opposition group has been requesting community-based organizations’ input in building its negotiating platform over the last two years.

With opposition groups beginning to include human rights issues among their negotiating points, concerns of women, farmers, even children, are appearing in ceasefire agreements for the first time. The ceasefire agreement in Karenni State now mandates local civilian groups to monitor certain state projects, while the new Chin State agreement makes free, prior, and informed consent of local populations a precondition for any large-scale development.

With sustainable peace still far off, Burma’s community-based organizations are working hard to influence the terms. Inter Pares will continue supporting them toward the dream articulated by many local activists: a political peace shaped around civilian, rather than military, interests.

Bringing community-based organizations together to ensure that civilian concerns are included in ceasefire negotiation processes in Burma.