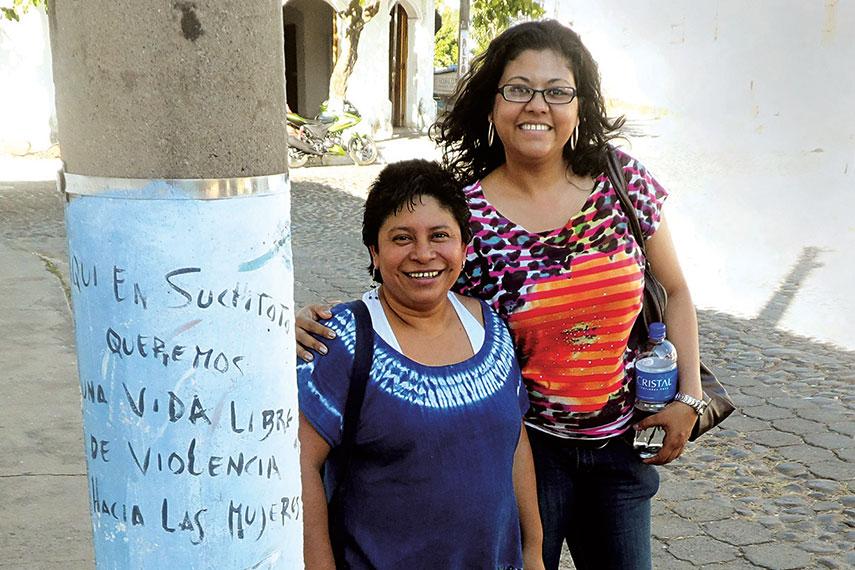 Speaking up against violence towards women: Angélica Rivas (right) stands with Veronica Zalazar next to a poster that says "here in Suchitoto we want a life free of violence against women." Credit: Bill Fairbairn

El Salvador has the highest density of volcanoes on the American continent. Just as tectonic plates shape the small country, El Salvador’s feminist movement has been transforming women’s reality. In recent years, the equivalent of an earthquake has been shaking Salvadoran society, and social movements are taking advantage of new political openings. Our counterpart, the Colectiva Feminista para el Desarrollo Local (the Feminist Collective for Local Development) has been at the epicentre of this phenomenon.

Angélica Rivas already considered herself a feminist when the guerilla-turned-political party Farabundo Martí National Liberation Front came to power in 2009, following a twenty-year reign by the conservative ARENA party. As one of La Colectiva’s young and energetic coordinators, she knows that Salvadoran women’s organizations have never shied away from peacefully taking to the streets on controversial issues.

Angélica also recalls that, before 2009, the usual response from government authorities would come in the form of police batons. Today, police forces are still present during demonstrations, but now they are accompanying and providing security for the marchers who are exercising their right to protest. In her words, “the government finally understands that no constructive change will be achieved by repressing the public.”

Further signs of this openness came with more opportunities for dialogue between government and civil society, such as a national roundtable on security issues. In this space, La Colectiva and other feminist organizations are represented by the feminist coalition Prudencia Ayala, and are joined by delegates from the country’s many churches and the private sector. Angélica believes that women are grossly underrepresented in these discussions.

Nonetheless, such openings have led to the adoption of nationwide gender-specific programs to combat violence against women. As state-sponsored repression drops dramatically, and spaces for dialogue with authorities open, Salvadoran civil society is rapidly catching up on stalled social progress, especially for women. Some issues, such as the right for women to have control over their own bodies, remain particularly sensitive in this socially conservative country. But La Colectiva and its allies will be at the forefront of struggles to make those changes happen, with support and solidarity from Inter Pares.

As state-sponsored repression drops dramatically, and spaces for dialogue with authorities open, Salvadoran civil society is rapidly catching up on stalled social progress, especially for women.