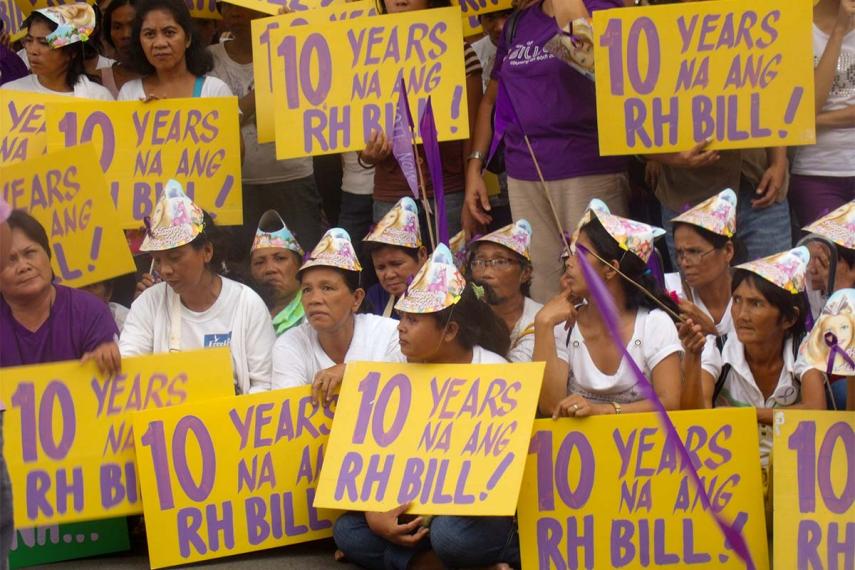 Protesters in front of the Philippines Congress demand a reproductive health law in 2011. Activists spent more than 10 years demanding the government pass it. Credit: Likhaan

“If you do service delivery alone, whatever policies are there, you must comply. But if you couple that with advocacy to change the policies, it will help in improving the service delivery,” says Joy Salgado.

It may not be glamourous but Joy sees firsthand how working to change government policy can multiply the impact of her small organization.

Joy is the advocacy coordinator of our counterpart organization in the Philippines, Likhaan. Inter Pares supports Likhaan to deliver free, high-quality medical services to women who need it, while treating them with respect and honouring their dignity.

But they realized from the start that they – one small organization – could never bring about all the needed changes to sexual and reproductive health and rights (SRHR) in the country of more than 100 million people. The tens of thousands of women and girls they support are still only a tiny fraction of people who need access to these services.

The reality is that the state provides most of the healthcare in the country and regulates the private providers who do the rest. So to impact the whole country, you have to change laws and policies and ensure that these changes are actually implemented.

To this end, we work with Likhaan to strengthen their advocacy efforts.

For years, we’ve supported Likhaan as they first applied pressure to pass a reproductive health law, which finally happened in 2012, and then for years more to ensure that it was  properly implemented.

Here are five creative and time-tested tactics Likhaan uses in their advocacy.

Showing exactly what you want (down to the last detail)

The Philippines’ reproductive health law states that comprehensive sexuality education   should be implemented in all schools. But it has taken 10 years of ongoing pressure for the government to introduce it and even now it has serious limitations.

Worried the government’s version of sex ed would be more of the same inadequate education, Likhaan did a survey of sex ed best practices from around the world. Based off this survey, they came up with a model curriculum and presented it to the government, saying this is what we want and what we expect.

Sometimes a national law is good but the local implementation is not.
In this case, the national reproductive health law says that contraception must be freely accessible to all women in the country. But sometimes local municipalities refuse to allow contraceptives to be provided within their jurisdiction.

When Manila did this, Likhaan organized local women’s groups to protest until the government of the capital city allowed contraceptives.

Strength in numbers: Working in coalitions and networks

Working with lawmakers to change regulations

Sometimes the advocacy is not about the laws but rather the regulations. At times, regulations don’t allow services to be as wide-spread as they need to be or as affordable as they should be.

For example, at one point the Philippines only allowed doctors and midwives to provide family planning. Likhaan convinced the national government to permit nurses to do this too, making family planning more widely available.

The national health insurance system initially only covered family planning through birthing clinics, making these services inaccessible to many communities. Likhaan advocated for stand-alone family planning clinics to be permitted and covered. Eventually, the government approved the idea, making it much easier to bring insurance-covered contraception to poor and marginalized women and girls in communities with no birthing clinics.

When the government won’t work with you, get creative

But sometimes it takes more to get the attention of government than a meeting request.

When this happens, Likhaan calls on local organizations, representing thousands of women, adolescents and LGBTIQ+ people, to take up the advocacy. Making use of press conferences, postcard campaigns, petitions and social media they apply pressure on the government. The creative advocacy sometimes takes to the streets with candlelight vigils, purple marches, and die-ins to draw attention to the women dying each day from the lack of access to sexual and reproductive health services.

Advocacy is hard to measure. The results are long-term and it is difficult to attribute changes directly to the work (what government wants to admit that they changed their mind because of advocacy?). But it is vitally important to bringing about lasting change.

We are grateful to Global Affairs Canada for their generous support of this work.

Want to know when you can take advocacy action in support of women and girls around the world? Sign up for our mailing list and you’ll be the first to know.