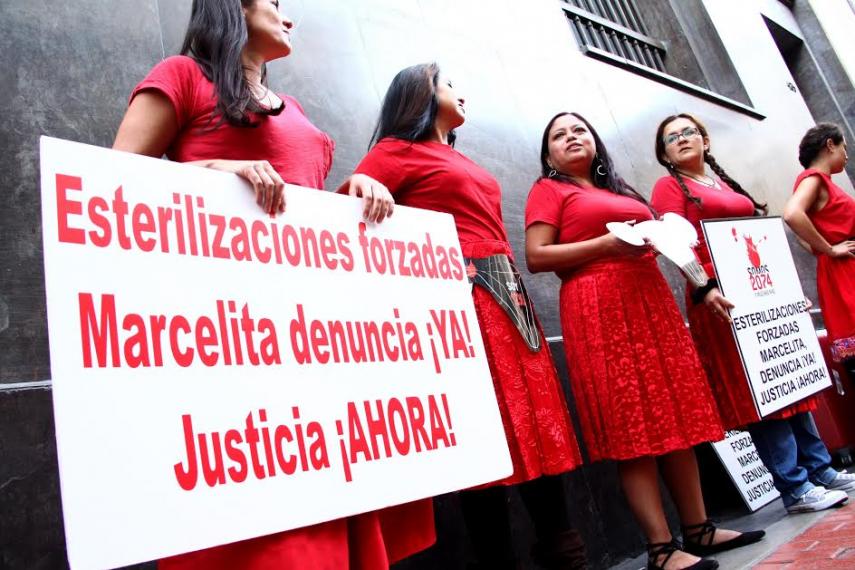 Women (including DEMUS director Maria Ysabel Cedano, centre) form a human chain in front of the office of the public prosecutor responsible for the case of forced sterilizations. Credit: Iván Vicente

Mamérita Mestanza hadn’t reached her 34th birthday when she died from complications resulting from tubal ligation surgery.  A mother of seven in rural Peru, Mamérita had received numerous visits from health officials, who told her that she and women like her with more than five children risked fines or jail sentences unless they consented to being sterilized. In reality, no such penalties existed. No one explained to Mamérita the consequences of the surgery or the risks involved. Nor was she provided the medical attention her family repeatedly sought following the operation, when Mamérita developed a serious infection.

Mamérita Mestanza’s story is far from unique. Between 1995 and 2000, under the pretext of combating rural poverty, the government of Alberto Fujimori sterilized an estimated 300,000 women and 20,000 men. Many were poor and illiterate Indigenous women and men who were coerced or tricked into surgery under threat of prosecution or by withholding medication or food subsidies. Public health officials were given quotas, and to meet their targets they frequently sterilized women without their knowledge or consent during routine pregnancy check-ups or following childbirth.

Inter Pares’ counterpart DEMUS has been at the forefront of the struggle to expose the truth of what happened and to hold the Peruvian state accountable. Working with other Peruvian organizations, DEMUS took Mamérita’s case to the Inter-American Court on Human Rights in 1999. Eventually, Peru acknowledged responsibility, and agreed to reparations for Mamérita’s family. This landmark case paved the way for an initial group of 2,074 women to come forward with their own stories, demanding justice. Following growing public pressure, nurtured in part by an effective public campaign by DEMUS, the Peruvian government announced in December 2015 the establishment of a national registry for persons affected by forced sterilizations.

Throughout 2016, Inter Pares’ partners in Peru are working to ensure that the public is aware of this registry, and to help victims complete the registration. The forced sterilizations program of the Fujimori government represents one of the darkest chapters of Peru’s history, and every effort must be made to ensure that such crimes are never repeated.