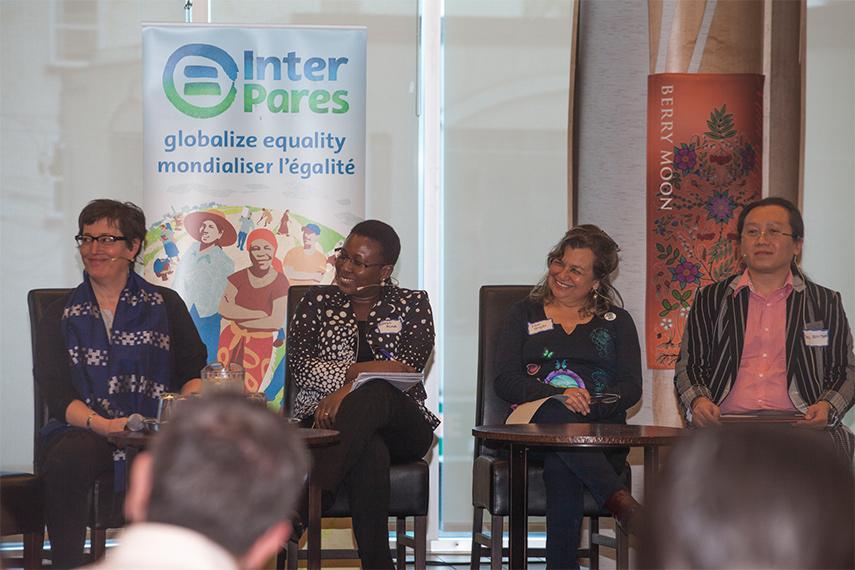 “What is the biggest obstacle to globalizing equality?” Last April, this question was put to four Inter Pares counterparts, who were featured speakers at our 40th anniversary gathering that day. Lack of political will. Corporate control over natural resources and policy processes. Privileging individual interest over the common good. Militarism and human rights abuses. The answers were a sober reminder of the formidable challenges in our collective path.

Speaker Paul Sein Twa’s personal story encapsulates these challenges. Growing up in Burma by the mighty Salween River, Paul’s village lived off the bounty of the river and the rich teak forests along its banks. In 1989, the country’s dictatorship began selling off the forest to a handful of corporations, who began logging for export, and in the process eroding the riverbank, fish stocks, and local livelihoods. The money gained from this plunder enabled the military to buy weapons, and the army used the logging roads to penetrate the thick forest and attack civilians and resistance fighters alike. The countries whose arms producers supplied weapons to the regime, or whose forestry companies profited, had no interest in intervening.

Our counterparts are driven rather than daunted by such challenges. After fleeing his village, Paul joined with other young activists to form the Karen Environmental and Social Action Network. Working with communities, they protect ancestral lands, establish livelihoods, and promote local culture. Our other counterparts have been similarly moved to act in their own regions, whether it be West Africa, Latin America, or Canada.

For four decades, Inter Pares has been building long-term relationships of mutual trust, support, and solidarity with and among people and organizations who are transforming their cultures and societies from within. Social change must come from people acting in their own contexts, actively participating in creating solutions to the injustices that affect them. Since our inception, we have worked with such local leaders, offering solidarity and acting in common cause.

This approach also leads us to be agents for change in our country. Day by day, we are building a constituency of engaged Canadians, who are ready to contribute funds and moral support; promoting responsible government policy and corporate accountability; and connecting overseas collaborators with activists here at home.

Over forty years, we have witnessed incredible change in the countries where we work. Dictatorships have fallen, armed conflicts have ended and refugees returned, laws protecting human and civil rights have been passed, public health has improved. But while such gains have improved the lives of millions of people, in many ways, struggles have only evolved. Militarized power structures outlast wars, and true democratization often remains a goal. While some rights have been gained, others become threatened. A country’s most vulnerable people remain its unhealthiest. The work of globalizing equality – of everyone on Earth reaching their full human potential – is unceasing.

So we look ahead with the conviction that there will always be a need for people to come together to fight inequality and work for peace and justice – but also the knowledge that we are already building the world we want, together. The future of international solidarity is here, right now.

Over forty years, we have witnessed incredible change in the countries where we work