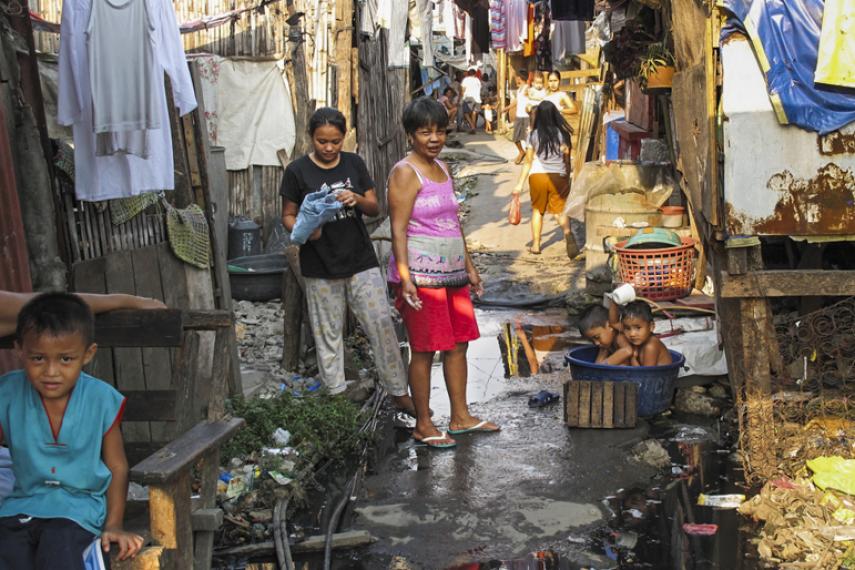 In March of 2010, Inter Pares staff member Rebecca Wolsak travelled to the Philippines to meet with our long-term counterpart Likhaan. Based in Metro Manila, Likhaan is a community-based primary health organization that works in impoverished urban and rural communities with an emphasis on women’s reproductive health and health policy. Rebecca invited Dr. Cynthia Maung to join her, together with two other colleagues from the Mae Tao Clinic based on the Thailand-Burma border. Dr. Cynthia’s clinic provides a wide range of health services for people from Burma who have fled their war ravaged country. This is an excerpt from Rebecca’s trip report:

On our first afternoon in Manila we headed to Paradise, where Likhaan has been working for fifteen years. The community was built on a former garbage dump and fish pond. When Likhaan first started working in the community, homes had been erected on top of the garbage; there was no electricity, violence was common and the place was ruled by gun-toting “electricity lords.”

We crossed a bridge over a garbage-clogged creek and entered Paradise. Children came running forward asking to be photographed. Over the past few years the paths between shacks and shops, far too narrow for vehicle access, have – bit by bit – been paved with concrete poured over the garbage. Many of the shacks have windows close to the ground because the community is sinking. Likhaan has a small clinic here, and there is a birthing house fairly close by (with an average of three to a bed).

We arrived at Likhaan’s tiny clinic and toured the four rooms from which it provides reproductive health care. Upstairs in the waiting room, there were dozens of recently acquired second-hand books on shelves. The clinic’s new “library” offers a safe space for youth to drop by, organize social gatherings, and discuss taboo subjects such as sex.

Spilling out of the waiting room library, eighteen of us sat and shared stories. There was laughter and nodding as health workers from both countries talked about navigating conservative cultural norms when working on reproductive health. We heard about women from Burma and women in Paradise who were desperate to have access to family planning as a means to gain some control over their own lives.

Dr. Cynthia described her work at the Mae Tao Clinic and the context in which people live in Burma. The Burmese regime spends less than 3 percent of the national budget on health care while 40 percent goes towards military expenses, funding a war against its own people. Across the river from the Mae Tao clinic, in Eastern Burma, there are currently at least 470,000 internally displaced people. The region is heavily land-mined and between August 2008 and July 2009 alone the regime destroyed or forcibly relocated 120 communities. Research from Dr. Cynthia’s health partners shows that in Eastern Burma one in five children dies before their fifth birthday, and one in twelve women dies during childbirth.

Communities like Paradise face similar obstacles. Education is “free,” but students must pay for desks, a guard, toilet cleaning, books… about 50 percent of children are in school. Women in these communities have an average of six or seven children, some as many as eighteen. There are numerous obstacles to women’s access to family planning and many women turn to Likhaan for post-abortion care. Abortion is illegal in the Philippines and so women are often at the mercy of poor quality and dangerous procedures.

There is a high level of drug abuse and trafficking, and it is not uncommon for girls to turn to prostitution, sometimes even with their parents’ encouragement. Malnutrition is a growing issue with more breast-feeding mothers needing to work. Young teenage pregnancies are very common.

Dr. Junice Melgar from Likhaan spoke about the difficulties they faced when trying to train community health workers. Initially, women could not attend workshops for longer than three hours because their husbands or fathers would not let them. As community trust grew and as the men in the health workers’ families took on more household responsibilities, the women were able to participate in five-day trainings. The Mae Tao clinic has also struggled to find ways to support women’s participation.

Both The Mae Tao Clinic and Likhaan know that in order to improve health in their communities, they need to address poverty and oppression. Their work is rooted in this understanding and the particularly lethal impact of these realities on women.

The discussion reminded me of our Inter Pares annual general meeting several years ago when Likhaan’s co-founder, Dr. Sylvia Estrada-Claudio, spoke passionately about the politics of health. Noting the connection between poverty and well-being, she said “...health, while non-partisan in the sense that it should be available to all … is nonetheless always political.” She went on to say that “People are less poor when they feel that they have the skills to intervene and that social institutions can be made to change to meet their demands. They not only feel their poverty less, they are also more likely to seek solutions and to make those solutions work.”

Back in our crowded waiting room exchange, one of the health workers asked Dr. Cynthia a final question: where do you find the inspiration to keep on working?

Dr. Cynthia did not pause: “relationships with others” she answered. She explained that working with other community organizations provides a multi-faceted approach to the root causes of poor health. Building these relationships, collaborating and learning from each other, gives her hope and determination to keep on working.

Touched by Dr. Cynthia’s answer, one young woman jumped up announcing that she wanted to give her a gift but had nothing to offer but a song. Several others joined in as she serenaded us in the library in Paradise.

View a slideshow of photographs from this trip:

Both The Mae Tao Clinic and Likhaan know that in order to improve health in their communities, they need to address poverty and oppression. Their work is rooted in this understanding and the particularly lethal impact of these realities on women.