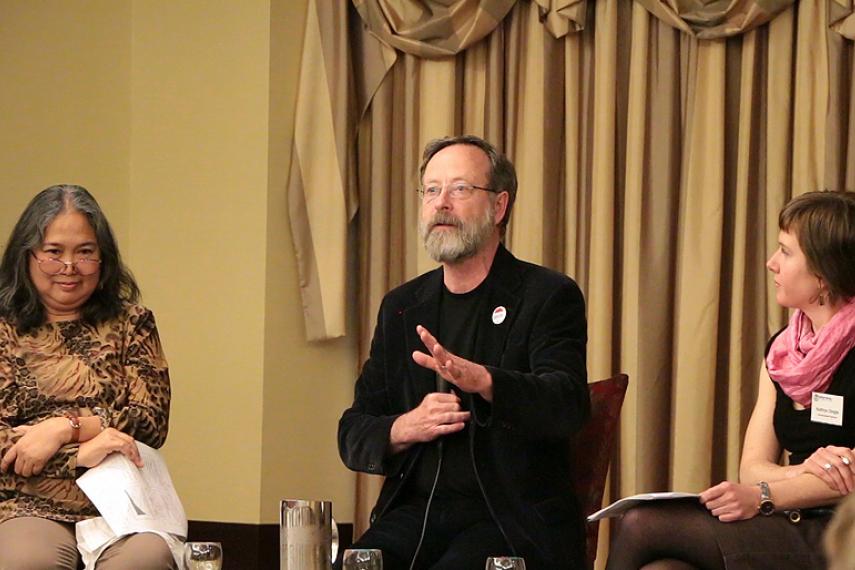 In April 2014, with funding from the Douglas Coldwell Foundation, Inter Pares brought together Dr. Junice Melgar, Director of Likhaan Centre for Women’s Health in the Philippines, and Mike McBane, then Coordinator of the Canadian Health Coalition (CHC). Dr. Junice and Mike presented at our Annual Speaker Series event in Ottawa. Over a hundred Inter Pares supporters joined us for an evening of discussion and storytelling.

Dr. Junice spoke about how Likhaan mobilized women who live in the poorest areas of Manila to tell their stories to people in power, those in the Congress and the Senate. Their efforts led to the passage of the Reproductive Health Law in 2012 to reduce maternal mortality in the Philippines. They are now using this victory to push for wider reforms for universal access to healthcare in the Philippines. Mike McBane reminded us that the Canada Health Accord expired in March 2014.

By refusing to re-negotiate with the provinces, the federal government has signalled that it will no longer take a leadership role in healthcare. Public health analysts predict this will lead to less access and more fragmented healthcare in Canada.

This is a concern to Dr. Junice who told us that Filipino public health students often study Canada’s system to find ways to improve their own. But Filipinos know the dangers of a highly fragmented healthcare system. Their system is mostly private, with over 1,500 independent regional health systems. In some regions of the Philippines, lobbying of local health councils by religious leaders has led to contraceptives being banned. As a result, poor women in these areas suffer from the debilitating health consequences of too many unplanned pregnancies. Inter Pares has supported and funded Likhaan’s work for over 20 years.

We have also contributed financially to CHC over the past 10 years, and our Executive Director Rita Morbia serves on its board of directors. With counterparts around the globe, we will continue to work to ensure that health is recognized as a human right. Through discussions like this year’s Annual Speaker Series, we are globalizing the struggle for universal healthcare.

Filipino public health students often study Canada’s system to find ways to improve their own. But Filipinos know the dangers of a highly fragmented healthcare system.