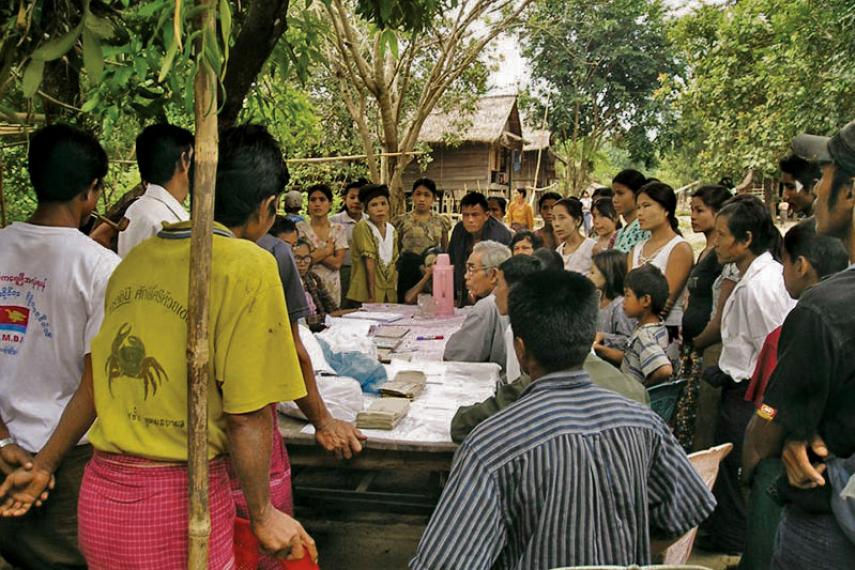 The Back Pack Health Worker Team: They provide workshops to villagers. Credit: BPHWT

The health conditions in conflict-affected areas of Burma are among the worst in the world. Health services are extremely limited, leaving the people vulnerable to dangerous diseases that have been eradicated in many other places. One of these diseases is lymphatic filariasis.

Commonly known as elephantiasis, lymphatic filariasis causes painful deformities and severe disability, which in turn lead to social stigma, loss of income and increased medical expenses. Transmitted by mosquitoes and highly endemic, this dangerous disease recurs cyclically in an area once it has taken hold. Fortunately, the transmission cycle can be broken through an annual mass treatment to an entire endemic population for five or six consecutive years.

While there are virtually no government health services available in most of rural Burma, the Back Pack Health Worker Team provides primary health care to a quarter of a million people. Inter Pares has supported the team since it was founded in 1998.

Some Back Pack health workers started seeing possible symptoms of lymphatic filariasis in their communities in Karen State in 2007. Soon after, they began antigen testing in three areas. The disease was found to be prevalent in all three, with an astonishing average rate of over 70%. Team members received immediate treatment training and began conducting mass treatments every year from 2008 to 2013.

Although many villagers were initially resistant to take the medication, this soon changed due to the team’s approach to health care. Run by teams of trained community members, their holistic primary health care approach includes medical care, community health education, preventative health care, and maternal and child health services. The Back Pack Health Worker Team aims to equip people with the skills and knowledge necessary to manage and address their own health problems. This approach is essential in the context of long-term conflict, and for now it is the only effective approach to providing health care in rural Burma.

Through community meetings, focus groups, posters and pamphlets, health worker teams in Karen State taught their communities about the disease, medication side effects and the strategy for eradication. A follow-up survey in 2011 found that prevalence of lymphatic filariasis had already dropped from 70% to 42%.

In contrast to this comprehensive action, in 2013 the national Ministry of Health began a limited elimination project to fight the disease nearby in southern Burma. There were many difficulties with this project, in part because there was little to no comprehensive education program to accompany the treatment. In late 2013, when the Director of Back Pack met with leaders in the national and Karen State health ministries, the officials acknowledged the multiple problems the Ministry’s program had encountered, and asked for guidance from the team.

Further data on the impact of the team’s project is currently being analyzed. Given its success, it is expected the program will be extended to other parts of Burma where the team works. This experience has proven again that a community-based and holistic health campaign can be extremely efficient and can lead to truly sustainable results.

The Back Pack Health Worker Team aims to equip people with the skills and knowledge necessary to manage and address their own health problems.