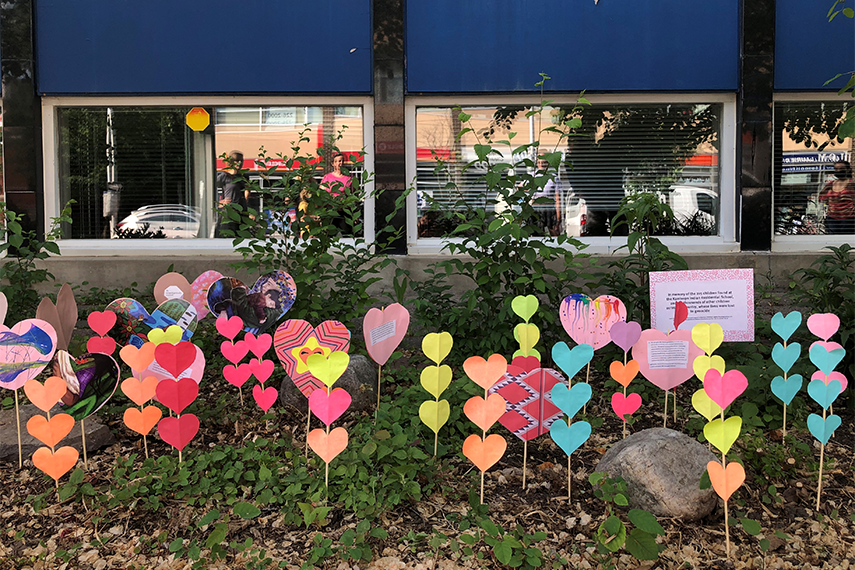 215 hearts were planted at our Ottawa office to honour the Indigenous children found near Kamloops, BC.

“We had a knowing in our community that we were able to verify. To our knowledge, these missing children are undocumented deaths,” stated Kukpi7 Rosanne Casimir. “Some were as young as three years old. We sought out a way to confirm that knowing, out of deepest respect and love for those lost children and their families, understanding that Tk̓emlúps te Secwépemc is the final resting place of these children.”

In late May, the Tk̓emlúps te Secwépemc Kukpi7 (Chief) Rosanne Casimir reported on finding the remains of 215 Indigenous children, buried in unmarked graves at the former site of the Kamloops Indian Residential School. The confirmation of the children’s deaths was made after more than two decades of searching for evidence of the fate of children who never returned home from the school.

The Kamloops Indian Residential School was in operation from 1890 to 1978, where the Catholic Church, and later the federal government, subjected Indigenous children to cruel and inhumane treatment, and damaged their connections to their culture, identity, and families. The school was part of a network of more than 130 residential schools spread across Canada – a key institution in a government-sanctioned policy of forced assimilation that would later become internationally recognized as genocide.

The news of these burial sites is anticipated to be followed by many others. Indigenous communities across the country have long spoken of their existence at former school sites, but the government has been slow or refused to offer funding and support to uncover lost loved ones. In 2015, as part of a national reconciliation process, the Truth and Reconciliation Committee of Canada released its Calls to Action. Among them, are calls related specifically to uncovering, identifying, and commemorating missing children and burial sites. There are also calls on the federal government to install monuments to honour survivors and children who were lost to their families and communities in Ottawa, as well as in capital cities across the country. To date, the government has not delivered on this action.

Our hearts are heavy from the Tk̓emlúps te Secwépemc’s announcement, and for the many more children who have yet to be found. As we collectively face the fullness of the horror of residential schools, we reflect upon the long and ongoing genocide that must stop. We call on the federal government to deepen its response to the Truth and Reconciliation Commission and the National Inquiry into Missing and Murdered Indigenous Women and Girls calls to action, and to uphold Indigenous children’s rights. We continue to seek our own opportunities to learn and to act, to work towards reconciliation, as we encourage all of us to seek this path. We encourage you to consult the guidance of the Tk̓emlúps te Secwépemc on how to support their community at this time.

In honour of the 215 children that were found, and the thousands of other children waiting to be found, we planted over 215 hearts at our Ottawa office. This was a gesture of our commitment to reconciliation as encouraged by the First Nations Child and Family Caring Society, to honour the memories of children that never returned home, to honour residential school survivors and their families, and to create space for our community to learn more and to grieve.