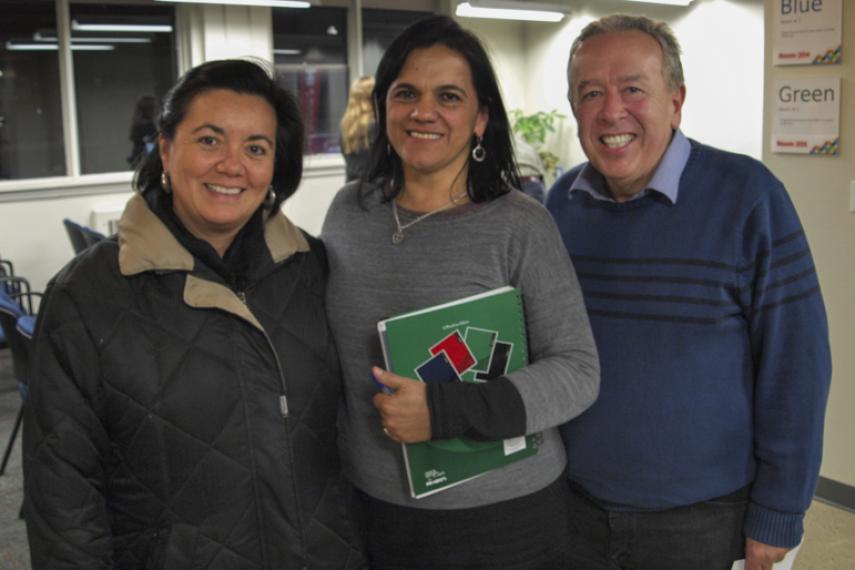 Coalition at its best: Julia Sánchez of the Canadian Council of International Cooperation, Mayra Alarcón of Project Counseling Service, and Bill Fairbairn of Inter Pares at a public event on Guatemala

In mid-2008, Inter Pares received funding from the International Development Research Centre to document the role that feminism has played in our history and methodology. The research revealed that coalitions have been a highly effective strategy for advancing our Canadian social justice efforts because through them, we have been able to achieve more than by working in isolation.

Inter Pares has always brought a strong feminist analysis to coalition work on a variety of issues – from food sovereignty to solidarity work with Burma – that not only raises the profile of women's concerns and women's activism, but values cooperation, consensus-based decision-making, and collective achievements over individual protagonism.

A good example of this is our work in Canada on issues concerning the Americas. In the mid-1980s, El Salvadoran refugees who had fled the conflict into neighbouring Honduras began organizing themselves to return home, a dangerous political act in which they requested accompaniment from the international community. Inter Pares, along with other Canadian organizations, responded to this call and began to coordinate efforts to leverage support from the Canadian government for the refugees. In the early 1990s, this coalition became similarly involved in the return process of Guatemalan refugees – supporting refugee women's organizations and their leadership in negotiating the conditions of their return. This process was historic – for its impact on Guatemalan peace building efforts, and for successfully pressuring the Canadian government to support grassroots human rights work.

Today this coalition, known as the Americas Policy Group, is a working group of the Canadian Council for International Cooperation. It coordinates the efforts of over 40 Canadian civil society organizations working in the Americas, to collectively respond to the needs of local counterparts and by engaging the Canadian government in defense of human rights. Over the decades, Inter Pares has played a central role in coalitions like these, advocating for collective efforts, maintaining a focus on women's needs and leadership, and building Canadian solidarity efforts that respond to local needs and hold the Canadian government accountable for its actions. This history of Inter Pares' belief in working together for genuine solidarity lives on today.

Promoting feminism as a crucial element to coalition building in Canada and abroad, as it values cooperation, consensus-based decision-making and collective achievements.