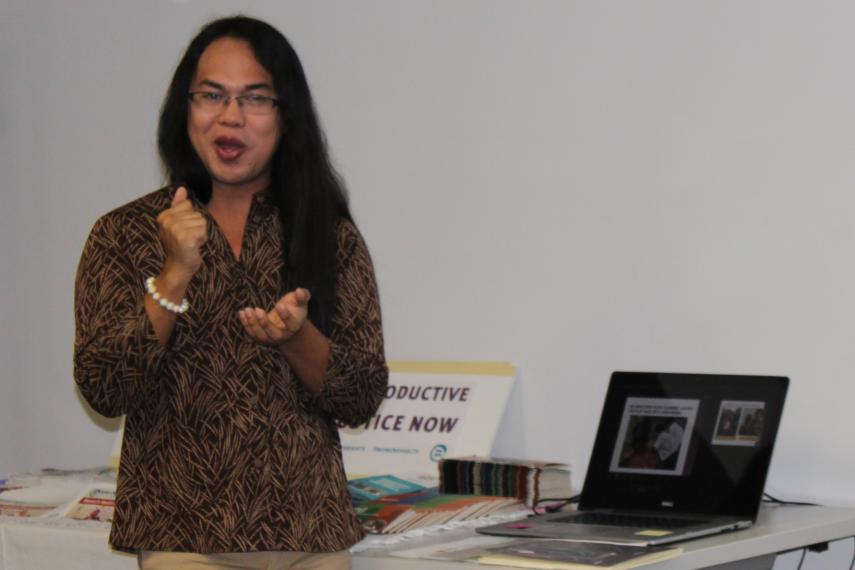 Mark Abellon grew up in one of the slum communities of Manila in the Philippines. As a child he grew to know Likhaan which had trained Community Health Workers from among the women living in his community. These women educated people in the community about reproductive health and contraception and encouraged women and youth to visit the Likhaan clinic. Now Mark is a youth who works with Likhaan doing similar work. He is a leader within the organization of youth and does the same outreach himself on sexual and reproductive health that he saw being done when he was a child.

In May, Mark got on a plane for the first time in his life and came to Canada along with his colleague, Caren Pineda. Both of them work with Likhaan as part of the Global Affairs Canada funded project to establish a network of four sustainable birthing and family planning clinics. The trip to Canada had a double objective: to talk to Canadians and tell them about the work of Likhaan; and to meet with Canadian groups working on the issue of adolescent reproductive health in order to strengthen this part of the project.

Together with Inter Pares staff Mark and Caren visited Toronto, Kitchener-Waterloo, Peterborough, Ottawa and Montreal. In each city they presented Likhaan’s program in events with Inter Pares supporters and the general public, as well as meeting with organizations like the SHORE Centre and Women’s Health in Women’s Hands to learn about their work on adolescent reproductive health. Mark and Caren went away with a wealth of resources and new ideas to improve the work back in the Philippines and even more motivated to find ways to reach out and educate youth on sexual and reproductive health issues.