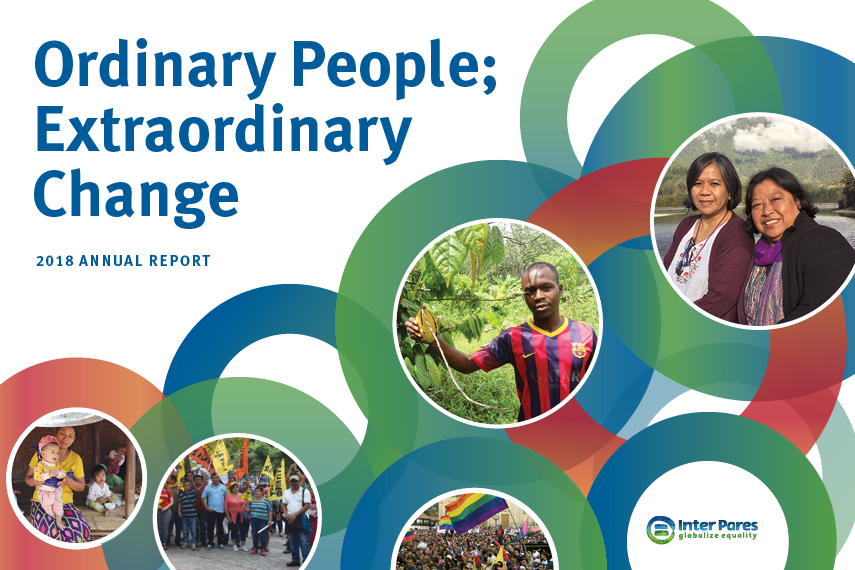 Without community, there is no liberation.

For over four decades Inter Pares has been committed to promoting deep and enduring relationships of common cause among civil society organizations in Canada and around the world – as equals, among equals. That is what Inter Pares signifies, and is the nexus of our action.

Over that long period there have been countless situations in countries around the world where we have walked alongside people and their organizations experiencing the hard steel of repression against their aspirations and actions for political freedom and progressive change. Our world is now in a particular moment of concerted and unabashed attacks by the powerful, against people who organize to protect their rights, develop ideas and mobilize for peaceful change.

In August 2018, the UN Special Rapporteur on extrajudicial, summary or arbitrary executions delivered her report, Saving Lives is Not a Crime, to the UN General Assembly. She found that rather than protecting rights, states are using judicial intimidation, criminalizing protest, assembly or speech to curb dissenters. And she expressed her outrage that governments are also criminalizing human rights and humanitarian organizations, using measures originally introduced as counter-terrorism laws.

This trend is not just in far-away places: as this publication goes to print, Canada’s Parliament is considering introducing new powers of mass surveillance through the new National Security Act, Bill C-59. Also in 2018, attacks against human rights defenders protesting corporate abuses increased by 34%, including legal harassment, intimidation, assaults and murder. In greatest danger were land rights defenders protesting violations by mining and agribusiness. Women human rights defenders are facing heightened threat, sometimes targeted for being activists – sometimes just for being women.

But at the same time, everywhere, people are refusing to let close around them the space for dissent and debate that they themselves have forced open through their courageous action. They think, organize and mobilize for policies and programs that benefit people and protect rights. It is our perspective that it is precisely this mobilization – and its successes – that is prompting the repressive reaction of the powerful. For that reason, now is a time to redouble our efforts to defend the defenders, working in common cause for a better world.

In this annual report, we share what we have learned with others over time, using examples of experiences and actions of ordinary people mobilizing to do extraordinary things. In these organizations and others, people are coming together to exercise their humanity, audacity, and courage to effect positive change in their communities.

What is happening today is not new. It is inherent in the quest for a humane and just world. The struggle to create – and recreate – dynamic, healthy civic spaces is age old; a story with far more success than failure, far more victories than defeats, far more remarkable accomplishments of deep communal cooperation than the opposite.

What is required is that we remember this, and remember that these successes come with people – acting together – persisting in our vision and our action to protect our dreams and aspirations, and to share them with others in our common struggle.