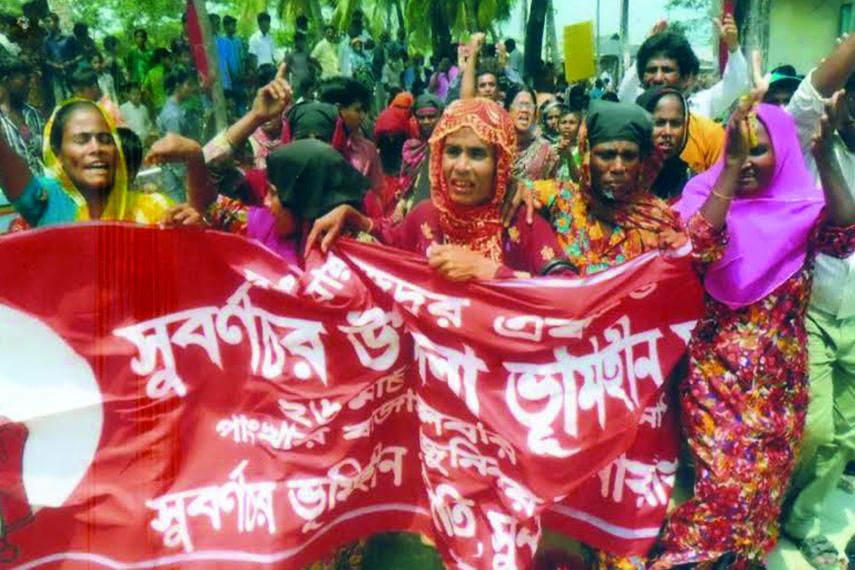 A protest to protect their land: women of the landless groups in Charbata, Bangladesh, are leading the resistance. Credit: Nijera Kori

The Meghna River in Bangladesh is a big, fast-moving river in the south of the country. Along its banks, in the communities of Charbata, thousands of poor families make their living from farming the rich alluvial soil and from fishing. Many are members of landless groups organized by Inter Pares’ counterpart Nijera Kori.

Wealthy local businessmen have been trying to take control of this area, and last year they claimed they had leased a large area of the river. They planned to build embankments enclosing the area for intensive agricultural production and fishing, depriving people of the riverside land and access to the river. The businessmen signed a secret agreement with labourers from another village to begin the work.

When Nijera Kori landless groups found out, they quickly began to strategize how to resist. By organizing a series of public meetings, and using street theatre and songs, members brought the situation to their neighbours’ attention. They collected signatures, made banners, staged marches, and demanded a meeting with the local government and water development board.The government engineer investigated and pronounced, “As per the law, the river belongs to the people and this river has not been leased by the government. To occupy the river or construct embankments in the river is a punishable offence.”

Despite this pronouncement, a few days later, the hired labourers, protected by an armed gang, began construction. Shortly after, more than 2,000 landless group members surrounded the armed gang and workers. After a three-hour standoff, the gang and the labourers gave in saying, “We are just doing this job to try to earn our living. We give you our word that in the future, we will not come to occupy the river. We are also poor people, and we support your movement.”

It was a victory for the poor over the powerful, of collective action over greed and violence. More than 2,000 people defended hundreds of families’ food security that day, by protecting the land to farm and the river to fish.

It was a victory for the poor over the powerful, of collective action over greed and violence.