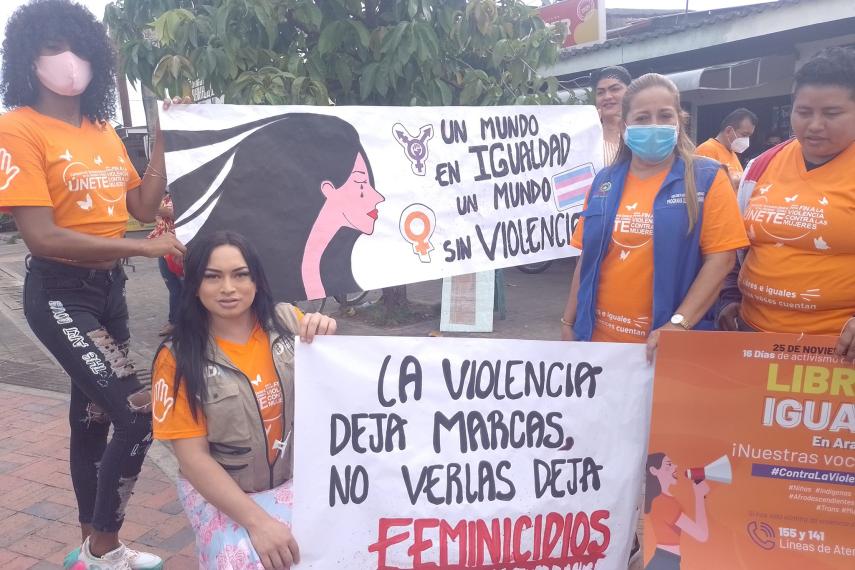 Inter Pares counterparts support grassroots groups to resist violence, including by marching on the International Day for the Elimination of Violence Against Women. Credit: Fundación Dignidad Trans

Culture and tradition can be sources of pride and belonging to nations and peoples. They can also be powerful tools to push back against alienation and exclusion, by challenging rigid definitions of who belongs and who does not.

In Quindío, Colombia, trans women have created Kathleya Trans, a grassroots group that combats violence and provides a safe space for trans women to come together. In a promotional tourism video the group produced, several members don the traditional chapolera dress and speak with great pride of the characteristics of their coffee-growing region, a UNESCO World Heritage site. In a cultural context in which trans women have had their right to wear traditional garb challenged, their wearing of the dress is, in itself, a powerful act of reclamation, and affirmation of trans identity. The group hopes to take part in upcoming cultural festivals – spaces where gender-diverse people have historically been excluded – to celebrate the region’s unique landscape while challenging the structural and cultural norms that promote violence and discrimination against trans people.

In another part of Colombia, next to the Venezuelan border, Fundación Dignidad Trans is also using powerful cultural symbols – in its case the joropo dance – to build bridges among the region’s inhabitants and press for better conditions for trans women, sex workers and Venezuelan migrants who are part of the community. Last year, for the International Day of Trans Visibility, members of the group wore traditional dress and gave an open-air concert in which they performed the joropo.

Despite some advances in recent years, trans people continue to face high levels of violence and a denial of their rights. According to the Latin American and Caribbean Network of Transgender People (REDLACTRANS), transgender women in the region have an average life expectancy of only 35 years.

Cristina Rodríguez, Program Coordinator of Fondo Lunaria, an Inter Pares counterpart that supports both grassroots organizations, says, “Kathleya Trans and Fundación Dignidad Trans recognize the importance of art and culture as pillars of social activism. For these trans women, art represents resistance against the violence they experience every day. It transforms their realities, gives new meaning to their territories, and becomes a powerful tool for social change.”