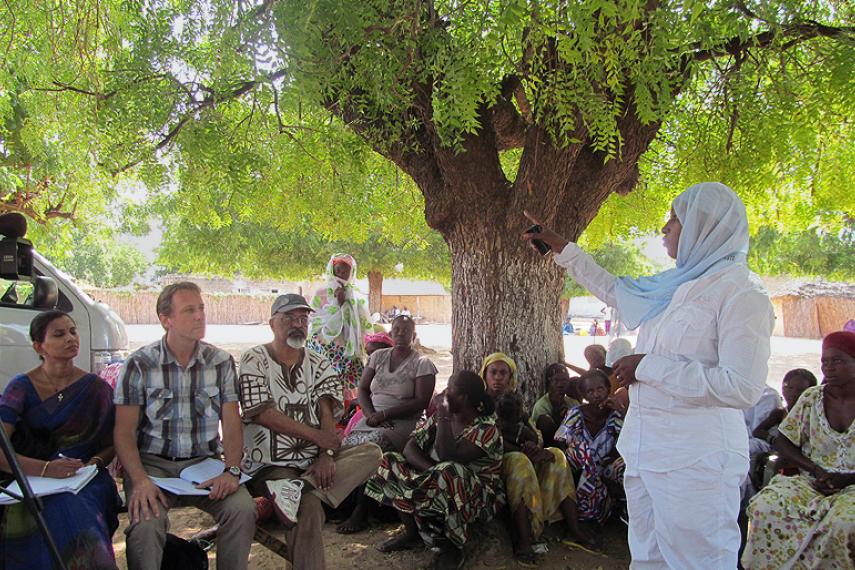 Learning exchanges are a key part of Inter Pares’ methodology. For nearly 40 years, we have seen that by bringing together dynamic and dedicated people from different geographies, the cross-pollination of ideas leads to new knowledge, bonds of solidarity – and to put it simply, bigger and better things.

“This one is called Bob Marley”, explains a farmer from the village of Diouroup, 140 kilometres south east of bustling Dakar, Senegal.

“Why do you call it Bob Marley?” I ask, looking at the sorghum he is holding.

“Because it makes your mouth sing.” I smile as we walk along the evenly planted rows of sorghum and millets under the beating midday sun.

I am here with Satheesh, Secretary of the Deccan Development Society (DDS), a long-time counterpart of Inter Pares in India. Satheesh is accompanied by Jayasri Cherukuri and Narsamma Masanagari, two dedicated women who are helping DDS document, through film and photography, the beautifully diverse fields of crops all around us.

We later visit the community of Fandéne where we are greeted by Georges Birane and other farmers of his community. Georges invites us to sit under the arbre à palabres – or talking tree – an area where people gather under the shade to discuss issues of importance to the community.

Colourful mats are placed under the ancient umbrella-shaped tree and appetizing dishes of millet and juice lay in the centre. Satheesh asks the farmers how many types of millets they farm. They answer two or three. “Would you be interested in growing fifteen?” The farmers are skeptical but also curious, and begin asking dozens of questions.

This is simply the next chapter of a story that is being written by farmers from India and West Africa. It began in 2012, when Inter Pares facilitated an exchange among leaders from the West African farm movement, Coalition for the Protection of African Genetic Heritage (COPAGEN), to learn from DDS’ ground-breaking work on biodiversitybased millet agriculture. They also learned about DDS’ work to document, through farmer-led research, the devastating impact that genetically engineered Bt cotton is having on farmers lives. Since then, COPAGEN members have put what they learned in India into practice. Inspired by DDS’ work with farmer-researchers, through a project they are calling “Bt cotton: the truth from our fields,” COPAGEN is working with 500 farmer-researchers in eighteen regions across Burkina Faso to document the impact of Bt Cotton.

COPAGEN also launched “foods of sovereignty,” an initiative that mirrors the work of DDS and its Millet Network of India. COPAGEN is working with women farmers to expand the ecological cultivation of traditional crops (black-eyed peas, sorghum, yams, millets, and sesame), and in doing so, reclaiming degraded land and increasing food security for communities in Mali, Côte
d’Ivoire and Burkina Faso.

As we leave his farm, Georges gives us some seeds to carry back with us. It is a fitting gift as seeds are a promise of good things to come. 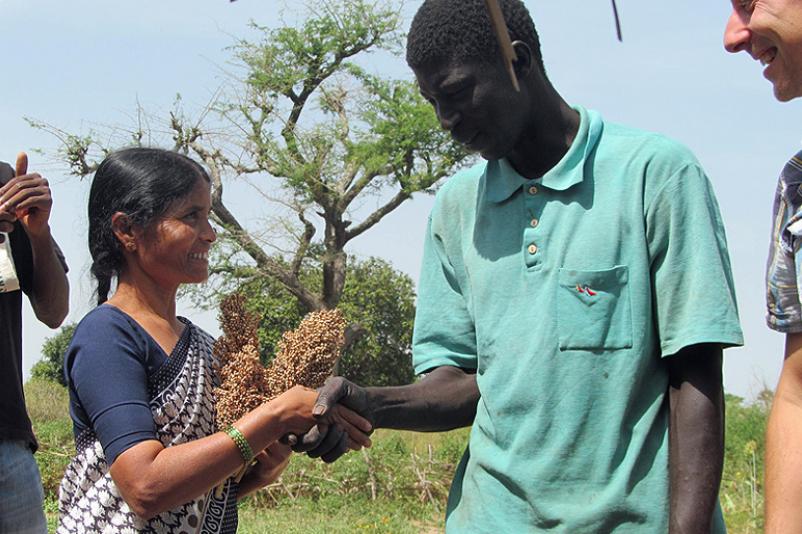