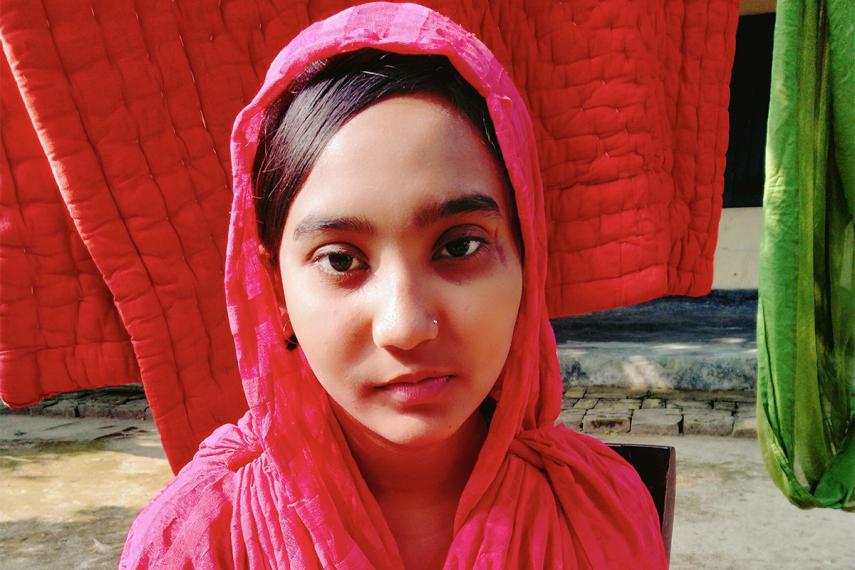 Trisha is now in school and her parents have agreed not to force her to marry Credit: Nijera Kori

Trisha* was just 14 years old when her parents told her she must marry a 25-year-old man from another village. She desperately did not want to marry – but she didn’t know she had the legal right to refuse.

That is, until one day, Trisha saw the side of a building with bright orange graffiti proclaiming:

Those five words gave Trisha hope. She entered the office of Nijera Kori, Inter Pares’ counterpart organization in Bangladesh, and asked them for help.

In spite of laws against it, Bangladesh has one of the highest levels of child marriage in the world. Young girls often don’t know their rights, feeling isolated and powerless when parents tell them they must marry. About 60% of girls in Bangladesh marry before age 18.

During the pandemic, the number of young girls forced into marriage in Bangladesh has increased. With more families suffering economic hardship, more parents chose to marry off their daughters to shift the burden of supporting a child to another family.

The recent spike in inflation threatens to worsen this problem.

Trisha was almost part of this statistic. Nijera Kori’s graffiti changed that.

The graffiti Trisha saw was part of their initiative to raise awareness about gender-based violence and child marriage. It not only succeeded in raising Trisha’s awareness of her rights – it also led to Nijera Kori stepping in and stopping her marriage from taking place.

Nijera Kori does awareness raising and advocacy work with a network of more than 220,000 people across Bangladesh. The network uses mass mobilizations to make the voices of the most marginalized members of society heard and respected. Last year, 664 local demonstrations ensured justice in cases of sexual and gender-based violence and helped stop child marriages.

You can help more girls like Trisha by funding life-changing work in Bangladesh. Together, we can help more young girls decide their own future.